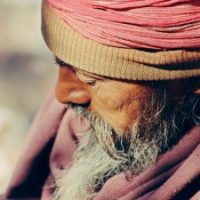 Listen To The Scripture Portion

G‑d speaks to Abram, commanding him, “Go from your land, from your birthplace and from your father’s house, to the land which I will show you.” There, G‑d says, he will be made into a great nation. Abram and his wife, Sarai, accompanied by his nephew Lot, journey to the land of Canaan, where Abram builds an altar and continues to spread the message of a one G‑d.

A famine forces the first Jew to depart for Egypt, where beautiful Sarai is taken to Pharaoh’s palace; Abram escapes death because they present themselves as brother and sister. A plague prevents the Egyptian king from touching her, and convinces him to return her to Abram and to compensate the brother-revealed-as-husband with gold, silver and cattle.

Back in the land of Canaan, Lot separates from Abram and settles in the evil city of Sodom, where he falls captive when the mighty armies of Chedorlaomer and his three allies conquer the five cities of the Sodom Valley. Abram sets out with a small band to rescue his nephew, defeats the four kings, and is blessed by Malki-Zedek the king of Salem (Jerusalem).

G‑d seals the Covenant Between the Parts with Abram, in which the exile and persecution (galut) of the people of Israel is foretold, and the Holy Land is bequeathed to them as their eternal heritage.

Still childless ten years after their arrival in the Land, Sarai tells Abram to marry her maidservant Hagar. Hagar conceives, becomes insolent toward her mistress, and then flees when Sarai treats her harshly; an angel convinces her to return, and tells her that her son will father a populous nation. Ishmael is born in Abram’s eighty-sixth year.

Thirteen years later, G‑d changes Abram’s name to Abraham (“father of multitudes”), and Sarai’s to Sarah (“princess”), and promises that a son will be born to them; from this child, whom they should call Isaac (“will laugh”), will stem the great nation with which G‑d will establish His special bond. Abraham is commanded to circumcise himself and his descendants as a “sign of the covenant between Me and you.” Abraham immediately complies, circumcising himself and all the males of his household.

Torah (with Hebrew and Strongs)

Parshat Lech Lecha. Avram, Sarai and Lot leave the comfort of Ur, and set out into the unknown; the Promised Land.

#20 The Terebinth Tree Of Moreh

#21 And The Canaanites Were Then In The Land

#22 The Lord Appeared To Abram

#41 And There He Built An Alter To The Lord