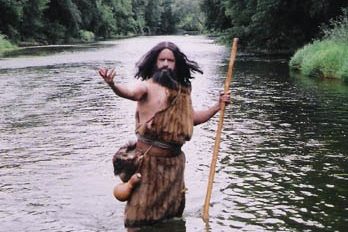 By Greg CummingDecember 3, 2018October 22nd, 2021No Comments
Watch This Message

Malachi the final prophet in the Old Testament, prophesied the coming of prophet Elijah.

Malachi 4:5 Behold, I WILL SEND YOU ELIJAH THE PROPHET before the coming of the great and dreadful day of the Lord.

Luke 1:13 But the angel said to him, “Do not be afraid, Zacharias, for your prayer is heard; and your wife Elizabeth will bear you a son, and you shall call his name Yochanan (John).
14 And you will have joy and gladness, and many will rejoice at his birth.
15 For he will be great in the sight of the Lord, and shall drink neither wine nor strong drink. He will also be filled with the Holy Spirit, even from his mother’s womb.
16 And he will turn many of the children of Israel to the Lord their God.
17 He will also GO BEFORE HIM IN THE SPIRIT AND POWER OF ELIJAH, ‘to turn the hearts of the fathers to the children,’ and the disobedient to the wisdom of the just, to MAKE READY A PEOPLE PREPARED FOR THE LORD.”

Very soon we see an ELIJAH-LIKE character come bursting onto the scene in the very same region of the Jordan River as where Elijah crossed over with Elisha.
Of course his name was YOHANAN the son of Zecharias. Yohanan haMatbil. We know him better as JOHN THE BAPTIST.

Mark 1:1 The beginning of the gospel of Jesus Christ, the Son of God.
2 AS IT IS WRITTEN IN THE PROPHETS: “Behold, I send My messenger before Your face, who will prepare Your way before You.”
3 “The voice of one crying in the wilderness:‘Prepare the way of the Lord; make His paths straight.’ ”
4 John came baptising in the wilderness and preaching a baptism of repentance for the remission of sins.
5 Then all the land of Judea, and those from Jerusalem, went out to him and were all BAPTISED BY HIM IN THE JORDAN RIVER, confessing their sins.
6 Now John was CLOTHED WITH CAMEL’S HAIR and with A LEATHER BELT AROUND HIS WAIST, and he ate locusts and wild honey.
7 And he preached, saying, “There comes One after me who is mightier than I, whose sandal strap I am not worthy to stoop down and loose.
8 I indeed baptised you with water, but He will baptise you with the Holy Spirit.”

Jesus completely clarified the issue to his questioning disciples:

Matthew 11:13 For all the prophets and the law prophesied until JOHN.
14 And if you are willing to receive it, HE IS ELIJAH WHO IS TO COME. 15 He who has ears to hear, let him hear!

So here is a man in the spirit and power of Elijah, in the very same spot of the Jordan River as Moses stood with Joshua and the children of Israel and Elijah stood with Elisha with the the sons of the prophets.
John stands with his DISCIPLES baptising people in the Jordan River when Jesus appears.
John identifies Jesus as the Messiah and the Lamb of God, is called upon to baptise Jesus to fulfil all righteousness, right in that very spot near Jericho, and then calls his own disciples (SONS OF THE PROPHET) to follow Jesus.
Jesus crosses again at this place with His disciples (the SONS OF THE PROPHETS) on the day that he entered into Jerusalem for that that very special upcoming Passover when He was to die for the sins of the nation of Israel and for the whole world.

Afterwards He would tell his disciples to go and make disciples of all nations – no longer needing a MASTER PROPHET anymore – because He was THE MASTER PROPHET, THE HIGH PRIEST AND THE KING OF KINGS.
And He would send His “Mantle” – the Holy Spirit to “Seal” them, Anoint them and Empower them” to complete the job.

And so the whole journey from Samuel the prophet who established the SONS OF THE PROPHETS – or DISCIPLES comes down the line through Elijah and Elisha all the way to John the Baptist and finally Jesus Himself.
God preserved His men in this fashion for more than 1000 years.