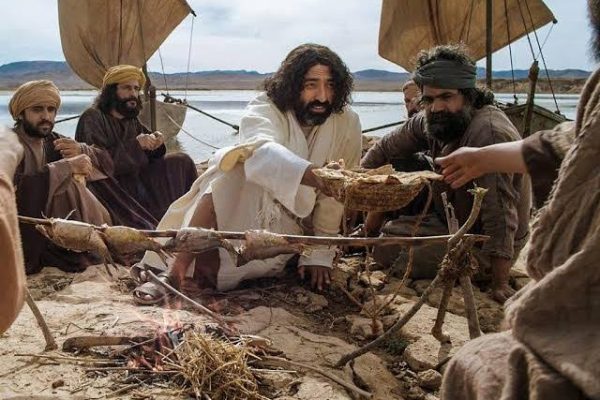 By Greg CummingNovember 23, 2018October 22nd, 2021No Comments
Watch This Message

We saw that the SONS OF THE PROPHETS actually had dormitories to stay in just like a live-in Bible College.

So what about the food situation? What did meal time look like for our young trainees?

The interesting thing here is that it was a famine and Elisha took the responsibility to prepare the food for his disciples.

Now look towards the time of Jesus and His disciples.

John 21:5 He called out to them, “Friends, haven’t you any fish?”
“No,” they answered.
6 He said, “THROW YOUR NET ON THE RIGHT SIDE OF THE BOAT AND YOU WILL FIND SOME.” When they did, they were unable to haul the net in because of the large number of fish.
7 Then the disciple whom Jesus loved said to Peter, “It is the Lord!” As soon as Simon Peter heard him say, “It is the Lord,” he wrapped his outer garment around him (for he had taken it off) and jumped into the water.
8 The other disciples followed in the boat, towing the net full of fish, for they were not far from shore, about a hundred yards.
9 When they landed, THEY SAW A FIRE OF BURNING COALS THERE WITH FISH ON IT, AND SOME BREAD.
10 Jesus said to them, “Bring some of the fish you have just caught.”
11 So Simon Peter climbed back into the boat and dragged the net ashore. It was full of large fish, 153, but even with so many the net was not torn.
12 Jesus said to them, “Come and have breakfast.” None of the disciples dared ask him, “Who are you?” They knew it was the Lord.
13 Jesus came, took the bread and gave it to them, and did the same with the fish.

There is a pattern here of discipleship. It’s not always about teaching from the front of a classroom.

1 Corinthians 4:15 For though you might have TEN THOUSAND INSTRUCTORS IN MESSIAH, YET YOU DO NOT HAVE MANY FATHERS; for in MessiahJesus I HAVE BEGOTTEN YOU THROUGH THE GOSPEL.
16 Therefore I urge you, IMITATE ME.

Are you a pastor, a leader?
Do you have disciples?
How are you training them?
Are you standing and teaching or do you take time to be with them LIKE A FATHER and a son so that they can IMITATE you.