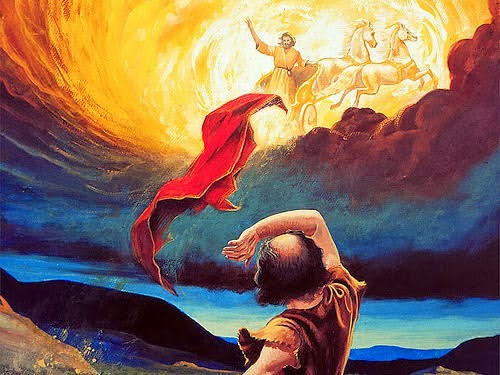 By Greg CummingNovember 9, 2018October 22nd, 2021No Comments
Watch This Message

2 Kings 2:11 Then it happened, as they continued on and talked, that SUDDENLY A CHARIOT OF FIRE APPEARED WITH HORSES OF FIRE, and separated the two of them; and ELIJAH WENT UP BY A WHIRLWIND INTO HEAVEN.
12 And ELISHA SAW IT, and he cried out, “MY FATHER, MY FATHER, THE CHARIOT OF ISRAEL AND IT’S HORSEMEN!” So he saw him no more. And HE TOOK HOLD OF HIS OWN CLOTHES AND TORE THEM INTO PIECES.

When the OLD MASTER died (or was taken away by a fiery chariot), the NEW MASTER was CHOSEN BY GOD to take his place.
In the case of Elijah, he passed on his PHYSICAL MANTLE to his successor Elisha.
Elisha received Elijah’s mantle and was immediately RECOGNISED BY THE SONS OF THE PROPHETS as the NEW MASTER.

So the leadership of the SONS OF THE PROPHETS, did not come necessarily from within the group. They understood that it was ultimately GOD WHO CHOSE THE NEW MASTER.

Regardless of how much a young man had trained, or had been groomed from within the group, it was God who chose the new leader.

In this case, Elijah’s successor as the MASTER PROPHET was an outsider.

Just as King David was not even in the first group of candidates that Samuel reviewed ause he was just a lad but was God’s choice for King.

Just as Moses was selected by God AS A BABY to be set aside and placed in Pharaoh’s household to grow up there. He had never had a chance to have presented his resume for the job.
Joshua was selected by God as a faithful, unrelated servant of Moses.

Just as Jeremiah was chosen by God when he was an insecure youth to be the mighty prophet at the time of the Babylonian captivity.

Just as Amos was chosen by God from the Kingdom of Judah, a sheep breeder from Tekoa, a businessman – called to go and deliver a scathing message from the Lord to the northern Kingdom of Israel.

John the Baptist was chosen BEFORE HE WAS BORN to be the final prophet before the Messiah arrived. Not the high priests, not the people with big names, not Gamaliel, not a Roman Caesar, not the rich or elect but a man born to a woman in her barrenness. God’s choice.

And just as the great Paul was not a part of the disciples of Jesus, but was a zealot and a murderer, actually killing the believers of Jesus until God stopped him on the road to Damascus and called him to take the message to the Gentiles.

This is a principle of the Bible – God’s succession plan of leadership is often overlooked in modern churches.

Do you think there is a different method that God uses?