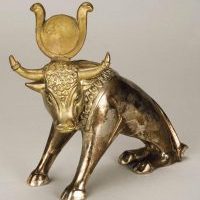 By Greg CummingOctober 5, 2018December 2nd, 2018No Comments
Watch This Message

Today we are going to look at a sad story. This is the story of how Bethel went from being a very special place known as the ‘House of God’, to being a place renowned for idol worship and apostasy.

After King Solomon, the King of all Israel died, Israel was split into two kingdoms. The northern Kingdom of Israel consisting of 10 tribes and the southern kingdom of Judah consisting of 2 tribes.

The King of Judah was Solomon’s son, Rehoboam who reigned from Jerusalem.

The first king of the new northern kingdom of Israel was Jeroboam, who reigned originally from Shechem.

To instigate a parallel system of worship to that of Judah in Jerusalem, Jeroboam created golden idols in the image of a calf and set them in temples at the northern and southern boundaries of his kingdom.

The northern temple was built at Dan.

Where would he put his southern temple? That’s right – BETHEL.

BETHEL was so strategically located on the border between Israel and Judah that it was there that King Jeroboam built his southern temple and set up the golden calf (probably with a shrine) at the high place.

He did this to intercept worshippers traveling to the Temple in Jerusalem.

1 Kings 12:25 Then Jeroboam built Shechem in the mountains of Ephraim, and dwelt there. Also he went out from there and built Penuel.
26 And Jeroboam said in his heart, “Now the kingdom may return to the house of David:
27 If these people go up to offer sacrifices in the house of the Lord at Jerusalem, then the heart of this people will turn back to their lord, Rehoboam king of Judah, and they will kill me and go back to Rehoboam king of Judah.”
28 Therefore the king asked advice, made two calves of gold, and said to the people, “It is too much for you to go up to Jerusalem. HERE ARE YOUR GODS, O Israel, which brought you up from the land of Egypt!”
29 And he SET UP ONE IN BETHEL, and the other he put in Dan.
30 Now THIS THING BECAME A SIN, for the people went to worship before the one as far as Dan.
31 He made shrines on the high places, and made priests from every class of people, who were not of the sons of Levi.
32 Jeroboam ORDAINED A FEAST on the fifteenth day of the eighth month, like the feast that was in Judah, and offered sacrifices on the altar. SO HE DID AT BETHEL, SACRIFICING TO THE CALVES THAT HE HAD MADE. And AT BETHEL, HE INSTALLED THE PRIESTS OF THE HIGH PLACES which he had made.
33 So he made offerings on the altar which he had made at BETHEL on the fifteenth day of the eighth month, IN THE MONTH WHICH HE HAD DEVISED IN HIS OWN HEART. And he ordained a feast for the children of Israel, and offered sacrifices on the altar and burned incense.

How sad. Jeroboam was a man who once professed God. Now when he had become a king of the northern tribes, he revealed that his belief system was no more than complete confusion.
He replaced the living God with man-made gold carvings of an animal. He forced his people to worship them as if they were God.

Have you checked your own faith in God?

Are you just walking a religious walk with the Lord or do you know Him?

When the pressure comes on you, will you simply abandon the one true eternal God for another representation of a god, perhaps an idol? Perhaps an ideology or philosophy?

Or will you stay true to the Lord?

Why not reaffirm your faith in Jesus today and ask Him to fortify your spirit so as to worship him to the very end.