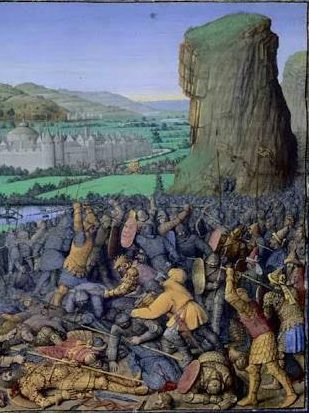 #65 The Taking of Bethel

By Greg CummingSeptember 30, 2018October 22nd, 2021No Comments
Watch This Message

Genesis 12:8 And he moved from there to the mountain east of Bethel, and he pitched his tent with Bethel on the west and Ai on the east; there he built an altar to the Lord and called on the name of the Lord

We are looking at the significance of the city of BETHEL.
This living city on the major trade route through the heart of Canaan, was assigned to the tribe of Benjamin.
Of course it is one thing to have something assigned to you on paper, and quite another thing to go and get it and own it in reality. And this was the case with the city of LUZ (BETHEL).
You don’t just walk up to the mayor of Luz and say “Hey you! Our captain Joshua told us that your wealthy city, and all its houses, and wells and walls and barns and hotels and businesses is now ours. Hand over the keys. There’s a good chap.”

No, no, no. In fact this was a fortified city and the Canaanites were very fond of their home. So taking Bethel was not going to be a walk in the park. And so the Benjaminites delayed in possessing Bethel because they knew it would be a fight.

Joshua 18:3 Then Joshua said to the children of Israel: “How long will you neglect to go and possess the land which the Lord God of your fathers has given you?”

What a statement. Ever wondered about the promises that the Lord has given you and me?

Promises like
John 15:10 If you keep My commandments, you will abide in My love, just as I have kept My Father’s commandments and abide in His love.

Luke 9:1 Then He called His twelve disciples together and gave them power and authority over all demons, and to cure diseases.
2 He sent them to preach the kingdom of God and to heal the sick.

The promises of the Lord often come requiring a response from us and by that I just don’t mean praying. Faith plus action always go together in the Bible. Often there is a fight required to realise God’s promises in my life.

With the tribe of Benjamin, the city of Bethel and Jebus had been allocated to them, but now they had to take it.

So Benjamin never took possession of the Jebusite city. And it became a city renowned to be a foreign city within the nation of Israel.

Judges 19:11 They were near JEBUS, and the day was far spent; and the servant said to his master, “Come, please, and let us turn aside into this city of the Jebusites and lodge in it.”
12 But his master said to him, “We will not turn aside here into a CITY OF FOREIGNERS, who are NOT OF THE CHILDREN OF ISRAEL….

It wasn’t until King David gained a bloodless victory over it that it eventually was brought under the Kingdom of Judah and eventually became the capital of Israel. But it remained in the allotment given to Benjamin.

As for BETHEL- although it was allocated to Benjamin, it was the tribe of Ephraim that eventually won the victory in that city.

22 And the HOUSE OF JOSEPH also WENT UP AGAINST BETHEL, and the Lord was with them.
23 So the house of Joseph sent men to spy out Bethel. (The name of the city was formerly Luz.)
24 And when the spies saw a man coming out of the city, they said to him, “Please show us the entrance to the city, and we will show you mercy.”
25 So he showed them the entrance to the city, and they STRUCK THE CITY with the edge of the sword; but they let the man and all his family go.
26 And the man went to the land of the Hittites, built a city, and called its name Luz, which is its name to this day.

So faith and action came together to take hold of the promise of God.

You may have the power to heal the sick and cast out demons, but of you don’t go to someone who is sick or demon possessed and pray for them, the authority and power that Jesus has given you will never be realised.

Also His love is available for you to abide in every day, but if you are not living according to His commandments, you may feel empty and void of His love.

Faith and action are what the Lord has intended. In fact it is evident in all of God’s actions toward us.

“For God SO LOVED the world that He GAVE His only begotten Son….”

What promise of the Lord are you going to activate today?