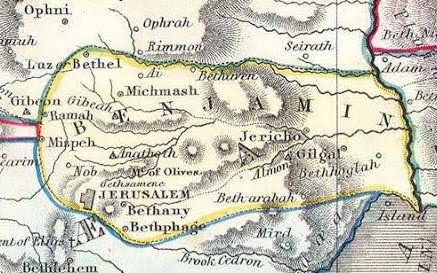 ‘’HE PITCHED HIS TENT ON THE MOUNTAIN EAST OF BETHEL” Part 22 – And the city of Bethel goes to the tribe of …..

Genesis 12:8 And he moved from there to the mountain east of Bethel, and he pitched his tent with Bethel on the west and Ai on the east; there he built an altar to the Lord and called on the name of the Lord

Joshua pulled out the survey records which had land allotments indicated on them.

And then he used the system of casting lots using the Umin and Thummin to see which tribes would inherit which block of land.

Firstly Joshua cast lots to see who would inherit the land north of Bethel.

Joshua 16:1 THE LOT FELL to the children of Joseph from the Jordan, by Jericho, to the waters of Jericho on the east, to the wilderness that goes up from Jericho THROUGH THE MOUNTAINS TO BETHEL,
2 then went out from BETHEL TO LUZ, passed along to the border of the Archites at Ataroth,
3 and went down westward to the boundary of the Japhletites, as far as the boundary of Lower Beth Horon to Gezer; and it ended at the sea.
4 So the children of Joseph, Manasseh and EPHRAIM, TOOK THEIR INHERITANCE.

So the tribe of Ephraim received the land just north of Bethel – see the map.

Notice that BETHEL and LUZ are mentioned separately.
This is because BETHEL WAS ON THE MOUNTAIN EAST OF LUZ but were considered to be the same in other places in scripture.

So Bethel (current day El Bireh) is on the natural SOUTHERN BORDER of the land allocated to EPHRAIM.

But BETHEL WAS NOT INSIDE EPHRAIM’S LAND. That border was north of the city.

So while Bethel was a marker for the border of Ephraim, it was literally just south of the border.
Bethel was a BORDER TOWN, but it didn’t belong to Ephraim.

So which tribe got Bethel as its inheritance?

So Joshua cast lots using the Umin and Thummin to determine who would get that choice piece of land in the mountains between Judah’s portion of land and Ephraim’s portion of land (Ephraim was Joseph’s son).
And the lot went to the tribe of BENJAMIN.

Joshua 18:12 Their border on the north side began at the Jordan, and the border went up to the side of Jericho on the north, and went up through the mountains westward; it ended at the Wilderness of Beth Aven.
13 The border went over from there TOWARD LUZ, TO THE SIDE OF LUZ (WHICH IS BETHEL) SOUTHWARD; and the border descended to Ataroth Addar, near the hill that lies on the south side of Lower Beth Horon.
14 Then the border extended around the west side to the south, from the hill that lies before Beth Horon southward; and it ended at Kirjath Baal (which is Kirjath Jearim), a city of the children of Judah. This was the west side.
15 The south side began at the end of Kirjath Jearim, and the border extended on the west and went out to the spring of the waters of Nephtoah.
16 Then the border came down to the end of the mountain that lies before the Valley of the Son of Hinnom, which is in the Valley of the Rephaim on the north, descended to the Valley of Hinnom, to the side of the Jebusite city on the south, and descended to En Rogel.
17 And it went around from the north, went out to En Shemesh, and extended toward Geliloth, which is before the Ascent of Adummim, and descended to the stone of Bohan the son of Reuben. 18 Then it passed along toward the north side of Arabah, and went down to Arabah.
19 And the border passed along to the north side of Beth Hoglah; then the border ended at the north bay at the Salt Sea, at the south end of the Jordan. This was the southern boundary.
20 The Jordan was its border on the east side. This was the inheritance of the children of Benjamin, according to its boundaries all around, according to their families.
21 Now THE CITIES OF THE CHILDREN OF BENJAMIN, according to their families, were Jericho, Beth Hoglah, Emek Keziz,
22 Beth Arabah, Zemaraim, BETHEL,
23 Avim, Parah, Ophrah,
24 Chephar Haammoni, Ophni, and Gaba: twelve cities with their villages;
25 Gibeon, Ramah, Beeroth,
26 Mizpah, Chephirah, Mozah,
27 Rekem, Irpeel, Taralah,
28 Zelah, Eleph, Jebus (which is Jerusalem), Gibeath, and Kirjath: fourteen cities with their villages. THIS WAS THE INHERITANCE OF THE CHILDREN OF BENJAMIN according to their families.

So which blessed tribe got the ancient loving city of Luz (or Bethel)?
It was BENJAMIN.

Only God could have arranged this situation because of course, with hindsight we know that the tribes of Judah and Benjamin became the Kingdom of Judah, while the other tribes became the Northern Kingdom of Israel.

I am always blessed when I see the hand of God so clearly in these important things. It makes me know that He is in the detail, and that He is directing The affairs of men and that He is protecting His covenant to ensure that it is not broken.

By the way, did you notice another very important name in the allocation of cities to Benjamin?
It is in verse 28.
That’s right. Jebus or as we know it today – Jerusalem.

This was the allocation made known to Joshua by God Himself, using the casting of lots.