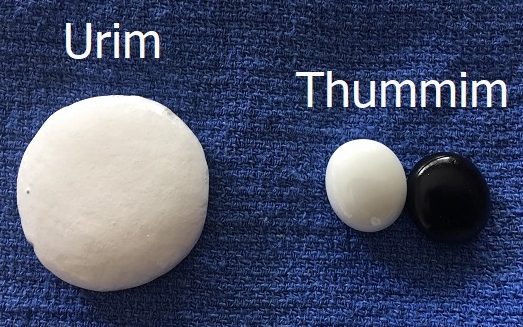 #63 Bethel – The Urim and the Thummin

By Greg CummingSeptember 26, 2018October 22nd, 2021No Comments
Watch This Message

We are talking about the casting of lots in the scripture, specifically how Joshua cast lots to determine which tribe received the city of Bethel.

Casting lots is first recorded in the days of Moses and Aaron. And here we are introduced to two very special words – Urim and the Thummim.

Exodus 28:30 And you shall put in the breastplate of judgment the URIM AND THE THUMMIM, and they shall be over Aaron’s heart when he goes in before the Lord. So Aaron shall bear the judgment (the ability to make decisions) for the children of Israel over his heart before the Lord continually.

Many Bible scholars believe that the Urim and Thummim are two sticks or stones that God permitted the priest use to reveal or confirm His will in major matters.

When the scriptures say a king or priest ‘inquired of the Lord’, this means that they sought God’s revelation by the use of the Urim and the Thummim. They were used for major decisions such as whether to go to war or not, and also for certain priestly matters.

For example:
Deuteronomy 33:8 And of Levi he said: “Let Your THUMMIM and Your URIM be with Your holy one, whom You tested at Massah, and with whom You contended at the waters of Meribah,

God commanded Moses to set Joshua as the new leader. Moses had enjoyed a face-to-face communication with the Lord. Joshua would stand before the high priest and be directed by the use of the URIM and the THUMMIM.

Numbers 27:18 And the Lord said to Moses: “Take Joshua the son of Nun with you, a man in whom is the Spirit, and lay your hand on him;
19 set him before ELEAZAR THE PRIEST and before all the congregation, and inaugurate him in their sight.
20 And you shall give some of your authority to him, that all the congregation of the children of Israel may be obedient.
21 He shall stand before ELEAZAR THE PRIEST, WHO SHALL INQUIRE BEFORE THE LORD FOR HIM BY THE JUDGEMENT OF THE URIM. At his word they shall go out, and at his word they shall come in, he and all the children of Israel with him—all the congregation.”

Also in the days of the Kings of Israel, when a king or priest called for the Ephod, it meant that a decision using the URIM and THUMMIM was being called for.

1 Samuel 23:9 When David knew that Saul plotted evil against him, he said to Abiathar the priest, “BRING THE EPHOD HERE.”
10 Then David said, “O Lord God of Israel, Your servant has certainly heard that Saul seeks to come to Keilah to destroy the city for my sake.
11 Will the men of Keilah deliver me into his hand? Will Saul come down, as Your servant has heard? O Lord God of Israel, I pray, tell Your servant.”
And THE LORD SAID, “He will come down.”

Why did David call for the Ephod?
Because it was worn with the breastplate which contained the URIM and the THUMMIM.

How did the Lord say “He will come down?”
Through the URIM and the THUMMIM.

Another example of King David calling for the Ephod (for the purpose of getting direction utilising the URIM and the THUMMIM).

1 Samuel 30:7 Then David said to Abiathar the priest, Ahimelech’s son, “Please BRING THE EPHOD here to me.” And Abiathar brought the ephod to David.
8 So David INQUIRED OF THE LORD, saying, “Shall I pursue this troop? Shall I overtake them?”
And HE ANSWERED HIM, “Pursue, for you shall surely overtake them and without fail recover all.”

King Saul used the system to discover the identity of the person who had broken his vow.

1 Samuel 14:41 Therefore Saul said to the Lord God of Israel, “GIVE A PERFECT LOT.” So Saul and Jonathan WERE TAKEN, but the people escaped.
42 And Saul said, “CAST LOTS between my son Jonathan and me.” So Jonathan was taken.
43 Then Saul said to Jonathan, “Tell me what you have done.”

Not always did the use of the URIM and the THUMMIM bring an answer.
King Saul did not get an answer from the Lord in regards to a battle against the Philistines and so then turned to a witch to conduct a séance.

1 Samuel 28:5 When Saul saw the army of the Philistines, he was afraid, and his heart trembled greatly.
6 And when Saul INQUIRED OF THE LORD, the Lord did not answer him, either BY DREAMS or BY URIM or BY THE PROPHETS.
7 Then Saul said to his servants, “Find me a woman who is a medium, that I may go to her and inquire of her.”

Here we get an insight that the main way revelation was received from the Lord was by:
Dreams,
URIM
Prophets.

The priest Ezra used casting lots to determine the ancestry of the priests who returned from the exile.
Ezra 2:63 The governor instructed them not to eat any of the sacred food until there was a priest who could consult the URIM and THUMMIM.

There are some who say that the URIM and the THUMMIM came from Moses’ encounter with God on Mount Sinai and actually reflect perfect light in response to inquiry by the High Priest for direction.

Some say they physically sit behind the breastplate next to the High Priest’s heart and light up when the Lord is giving direction.
(In this explanation, the Thummim are two same-sized stones – one black and one white.
The Urim is a special different stone altogether.
In response to the question, the priest puts his hand behind the breastplate and selects one of the Thummim, along with the Urim.
As he brings them out in his hand, the Thummim colour reveals white -yes or black-no and the Urim produces light if this is the answer from God. If the Urim does not illuminate, God is not speaking.
To the overcoming church in Revelation 2:17….And I will give him a WHITE STONE, and on the stone a new name written which no one knows except him who receives it.” suggests a reference to the ‘Yes’ stone of the Urim and Thummim – the judgement of the eternal High Priest – Jesus).

Some say the URIM and THUMMIM are special sticks or stones contained in a pouch on the priests breastplate and brought out and cast (as in casting lots) to discover the Lord’s will.

Whatever the URIM and the THUMMIM were, they were very special to the Lord, to Moses, to the High Priest, to Joshua, to King Saul, King David, to Esra and Nehemiah, but seem to disappear from use after the days of Ezra and Nehemiah.

Have you ever heard of the Urim and the Thummim before?

What do you think they were?

Do you think that in these days we should be using the Urim and Thummim or has the Lord given us something even greater than that to determine His will in the earth and for our lives?

The following pictures are just some possibilities of the Urim and Thummim put forward as a best case by some Rabbis. The scripture is quiet on the specific details.