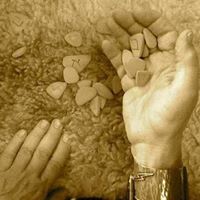 By Greg CummingSeptember 24, 2018October 22nd, 2021No Comments
Watch This Message

So men went out to survey the land and located key points with boundary markers.
And then the surveyors were to bring back the entire survey so that Joshua could make a decision on which tribe would get which plot of land.

Casting lots? Isn’t that just handing everything over to chance?

Well in the scripture it is established that casting lots is NOT a matter of chance at all, but rather a legitimate way that the Lord makes His decisions known.

Proverbs 16:33 The LOT IS CAST into the lap, but ITS EVERY DECISION IS FROM THE LORD.

Leviticus 16:7 He shall take the two goats and present them before the Lord at the door of the tabernacle of meeting.
8 Then AARON SHALL CAST LOTS for the two goats: one lot for the Lord and the other lot for the scapegoat.
9 And Aaron shall bring the goat on which the Lord’s lot fell, and offer it as a sin offering.
10 But the goat on which the lot fell to be the scapegoat shall be presented alive before the Lord, to make atonement upon it, and to let it go as the scapegoat into the wilderness.

By the time of Joshua it was a system that was used to determine the important decision of land inheritance.

By the time of the Kings of Israel, casting lots was well understood to determine the will of the Lord. When Samuel the prophet was needing to determine whom the Lord had chosen as the king of Israel, he used lots.
1 Samuel 10:20 And when Samuel had caused all the tribes of Israel to come near, the tribe of Benjamin WAS CHOSEN.
21 When he had caused the tribe of Benjamin to come near by their families, the family of Matri was chosen. And SAUL THE SON OF KISH WAS CHOSEN. But when they sought him, he could not be found.

King Saul used the system to discover the identity of the person who had broken his vow.
1 Samuel 14:41 Therefore Saul said to the Lord God of Israel, “GIVE A PERFECT LOT.” So Saul and Jonathan WERE TAKEN, but the people escaped.
42 And Saul said, “CAST LOTS between my son Jonathan and me.” So Jonathan was taken.
43 Then Saul said to Jonathan, “Tell me what you have done.”

King David used the system exclusively to determine the duties of every musician and singer in the house of God and the gatekeepers.
1 Chronicles 25:8 And they CAST LOTS FOR THEIR DUTY, the small as well as the great, the teacher with the student.

1 Chronicles 26:12 Among these were the divisions of the gatekeepers, among the chief men, having duties just like their brethren, to serve in the house of the Lord.
13 And they CAST LOTS FOR EACH GATE, the small as well as the great, according to their father’s house.
14 The lot for the EAST GATE FELL TO Shelemiah. Then THEY CAST LOTS for his son Zechariah, a wise counsellor, and HIS LOT CAME OUT FOR the North Gate…..

The priest Ezra used casting lots to determine the ancestry of the priests who returned from the exile Ezra 2:63

Nehemiah used lots to determine the wood carrying schedule for the house fo God.
Nehemiah 10:34 We CAST LOTS among the priests, the Levites, and the people, for bringing the wood offering into the house of our God, according to our fathers’ houses, at the appointed times year by year, to burn on the altar of the Lord our God as it is written in the Law.

Ah but isn’t that all Old Testament? Today we have the Holy Spirit who speaks with us in our hearts.
Incredibly, the system of casting lots was employed by the early disciples to determine God’s will just as King David used it 1000 years earlier in the House of God.

Acts 1:23 And they (the apostles) proposed two: Joseph called Barsabas, who was surnamed Justus, and Matthias.
24 And they prayed and said, “You, O Lord, who know the hearts of all, show which of these two You have chosen
25 to take part in this ministry and apostleship from which Judas by transgression fell, that he might go to his own place.”
26 And THEY CAST THEIR LOTS, AND THE LOT FELL ON Matthias. And he was numbered with the eleven apostles.

Yes. In the most serious decision of selecting Judas’ replacement, the disciples did not leave the decision to their own ability or wisdom, nor to the resumes of the two men sitting in front of them. They called upon the mighty Holy Spirit to give His choice and to hear His decision they cast lots.

And so Joshua CAST LOTS to determine the will of the Lord regarding the inheritance of the land.

But how did Joshua cast lots? The roll of a dice?