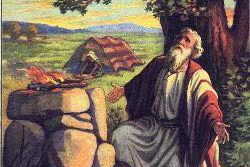 We are investigating the significance of Bethel in the scriptures.

Jacob encountered God at Bethel for the first time (age 77). He was alone, afraid, running away and had no possessions. He slept at Bethel and in his dream encountered the Lord who confirmed the covenant that he had made with Abram at Bethel on this very spot.

Jacob was so moved that he set up a memorial stone, poured oil on it and made a vow to God.

He then left for Haran in Padam Aram.
There he married 4 wives, had 11 sons and a daughter, raised a lot of wealth and then returned in a great company back to Canaan and eventually back to this very spot – Bethel.

An altar as we have seen in a previous post, is NOT a memorial stone. A stone is a stone. An altar is built of several stones with the purpose of performing a sacrifice.

Here a wiser, more weathered Jacob is making his own heart-felt commitment to God and acknowledging that God had made a covenant with Abram, Isaac and now himself.

He was a part of something far greater than himself and he was playing his part.

Have you ever come to realise that God is NOT HERE TO BLESS YOU?

My brother Michael once made a very wise statement to me and I adopted it into my understanding of the way that God is.

This is what he said.
“Life is not about doing my own thing and then asking God to come over and bless me.
Rather God is already doing something in this world (which is already blessed), and He is inviting me to come over and be involved in what He is doing.
If I accept His invitation and join Him in it, then I am automatically coming under His blessing.”

What a wise saying!

“If God will be with me and keep me in this way that I AM GOING
Give me bread to eat
Clothing to put on
So that I come back to my father’s house in peace
Then the Lord shall be my God.
…and I will surely give a tenth to you.”

Hmmmm. That sounds a bit like – “I’m doing this thing Lord, starting this new business, marrying this non christian man, doing this shady deal, telling only a small lie, building my empire over here, buying this lotto ticket – if you bless me I will do the honour of making you MY God and I will give you a tenth to you.”

But on his return to Bethel, after 20 years of hard work, being deceived by his uncle, working through difficult relationships, running for his life, mending past offences, burying his foreign idols, living in the wrong place (Shechem), having his daughter violated, seeing his sons murder a whole city – Jacob came back to Bethel but this time – instead of a memorial, he built an altar.

This time he was saying “I want to live my life where you are Lord.
I want to do what you want me to do.
I lay my life on the altar Lord.
I don’t want you to come and bless me in what I am doing – I want to come and do your will on this earth and see your kingdom come.
Then I will automatically be blessed.

That is TRUE WORSHIP.
When I first come to the Lord, it is all about me! “I will follow you Jesus IF you bless me.”

When I have walked with Him a while it becomes – “I want to be where you are Lord.
I lay down my life to do what ever you want with me.
I am not my own, I have been bought with a price.”

Best to be doing what the Lord is doing. That’s why the scripture says “Whoever blesses Israel shall be blessed.”

So now on this site, on the mountain east of Luz (Bethel), there are two altars (Abram’s and Jacob’s) and a memorial stone (Jacob’s).