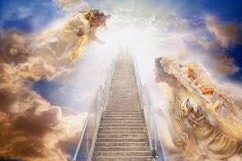 By Greg CummingSeptember 7, 2018October 22nd, 2021No Comments
Watch This Message

Jacob is escaping his brother Esau who is very angry because Jacob deceived him out of his birthright and blessing. He has made a beeline to this mountain east of Luz where his grandfather Abram had settled for some time with a large community and erected an altar.

Here Jacob sets up a stone and lies down beside it and while asleep he has a dream and sees a stairway from earth to heaven, with angels ascending and descending upon it . Then he sees the Lord (Adonai).

I believe that It was the Messiah, the Angel of the Lord, the Son of God, the Word of God, Jesus.

And the Lord takes this opportunity to tell a very vulnerable Jacob a very special and encouraging message.

And what does the Lord say?

He confirms the covenant that He made with Abram in Shechem, here at Bethel, at Hebron and at Salem (Jerusalem).

1. I am the Lord God of Abraham your father and the God of Isaac; THE LAND ON WHICH YOU LIE I WILL GIVE TO YOU AND YOUR DESCENDANTS.

How encouraging to Jacob. He is running from Esau towards Haran, fearing for his life. But the Lord says that he will have descendants. That means he will find a wife and have children.

2. Also YOUR DESCENDANTS SHALL BE AS THE DUST OF THE EARTH;

The Lord is describing a nation of millions of people to a single man. This is a vision that he will never see fulfilled in his lifetime and yet it is a comfort to Jacob to know that God is a faithful God Who will keep His word -both to His grandfather Abram, his father Isaac and to himself.

3. You shall spread abroad TO THE WEST AND THE EAST, TO THE NORTH AND THE SOUTH.

Luz (Bethel) is a living city positioned on the connection on the major trade route from north to south and the route from the sea across the mountains and down the descent to Jericho and the Jordan valley. Truly this is an accurate promise that Jacob could not have imagined in his day.

4. And IN YOU AND IN YOUR SEED ALL THE FAMILIES OF THE EARTH SHALL BE BLESSED.

Here is the blessing on the nations, the Gentiles. Everyone on earth will be blessed by the Lord through Jacob and his descendants.

Again, if we just simply think how many people today used Google Maps, a smart phone, a computer, drip irrigation, cyber security, or a myriad of other life-saving technologies we can see a practical benefit to mankind for this promise.

But the greatest fulfilment by far is that Jacob and his descendants were the custodians of the Torah, the Bible, the Tabernacle, the Festivals (appointments of the Lord) and ultimately the Messiah Jesus.

Yes we as Gentiles are blessed -we have salvation -because of this promise. Hallelujah.

5. Behold, I am with you and will keep you wherever you go,

Such an encouraging word to Jacob at this lonely point of his life. Have you ever felt alone and in need of this commitment from the Lord? It is a promise of the Lord’s Presence and His provision and sustenance.

6. And WILL BRING YOU BACK TO THIS LAND;

We don’t always know the plans of the Lord but He knows His plans for us. “The steps of a good man are ordered by the Lord”.

For Jacob -God would bring him back (and we know that it would be 20years and that he would not be alone – but with 4 wives and many children, servants and livestock.

7. For I will not leave you until I have done what I have spoken to you.

How often have you needed to hear that promise?
Jacob needed it then. We need it now.

Here’s the great news – the same person who promised all this to Jacob as he slept in Bethel, is the same Jesus who is your Saviour.
And He will not leave you nor forsake you if you place your trust in Him.

Have another read through those promises to Jacob.
Take some time with the Lord today to put before Him the things you are going through in your life in this season. Is it health?Is it relationships? Is it financial?

What ever it is, you are not alone.
He promises that He will not leave or forsake you and if you can believe Him and put your trust in Him, He will bring His salvation to pass in your life.