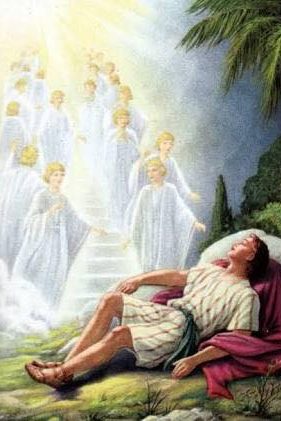 By Greg CummingSeptember 3, 2018October 22nd, 2021No Comments
Watch This Message

In Abram’s day, the city was called Luz. But at some point the name of Luz was changed, or became known by the Israelites as ‘Bethel’.

We are going to go forward in time about 185 years from Abram’s day, to the time of his grandson Jacob to see how and why the name of the city changed.

Jacob ‘stole’ both the birthright and the blessing from his older twin brother Esau and then was compelled to flee from Esau.

Genesis 28:5 So Isaac sent Jacob away, and Jacob went to Padan Aram, to Laban the son of Bethuel the Syrian, the brother of Rebekah, the mother of Jacob and Esau.

Genesis 28:10 Now Jacob went out from Beersheba and went toward Haran.
11 So he CAME TO A CERTAIN PLACE and stayed there all night, because the sun had set. And he took one of the stones of that place and put it at his head, and he lay down in that place to sleep.
12 Then he dreamed, and behold, A LADDER WAS SET UP ON THE EARTH, and IT’S TOP REACHED TO HEAVEN; and THERE THE ANGELS OF GOD WERE ASCENDING AND DESCENDING ON IT.
13 And behold, THE LORD STOOD ABOVE IT and said: “I am the Lord God of Abraham your father and the God of Isaac; THE LAND ON WHICH YOU LIE I WILL GIVE TO YOU AND YOUR DESCENDANTS.
14 Also your descendants shall be as the dust of the earth; you shall spread abroad to the west and the east, to the north and the south; and IN YOU AND IN YOUR SEED ALL THE FAMILIES OF THE EARTH SHALL BE BLESSED.
15 Behold, I am with you and will keep you wherever you go, and WILL BRING YOU BACK TO THIS LAND; for I will not leave you until I have done what I have spoken to you.”
16 Then JACOB AWOKE from his sleep and said, “Surely THE LORD IS IN THIS PLACE, and I did not know it.”
17 And he was afraid and said, “HOW AWESOME IS THIS PLACE! THIS IS NONE OTHER THAN THE HOUSE OF GOD, AND THIS IS THE GATE OF HEAVEN!”
18 Then Jacob rose early in the morning, and took the stone that he had put at his head, set it up as a pillar, and poured oil on top of it.
19 And he CALLED THE NAME OF THAT PLACE BETHEL; BUT THE NAME OF THAT CITY HAD BEEN LUZ PREVIOUSLY.
20 THEN JACOB MADE A VOW, saying, “If God will be with me, and keep me in this way that I am going, and give me bread to eat and clothing to put on,
21 so that I come back to my father’s house in peace, then the Lord shall be my God.
22 And this stone which I have set as a pillar shall be God’s house, and of all that You give me I will surely give a tenth to You.”

So it was Jacob who renamed the city of Luz and made it Bethel, though the people of Luz probably didn’t change the name of their city Luz to Bethel just because Jacob (aged 77) had a dream one night as he passed through.

It would be around 29 years later that Jacob would pass through ‘Bethel’ again at age 106, with his family – including Leah, Rachel and his 2 other wives and their 11 sons and daughter and their families.

It gradually became known as Bethel to Jacob’s family.

Here, as a single man escaping from his twin brother, Jacob had a significant dream seeing a ladder between heaven and earth, the gate between earth and heaven, angels ascending and descending upon it.

He saw God standing at the top.

And the words the Lord said were to reiterate the covenant that He had given Abram – that the land would belong to Abram’s descendants.

The Lord indicated that Jacob would leave the land and be brought back.

And He said that the whole world would be blessed by Jacob and his descendants.

Why not take a moment to thank the Lord that He is faithful to fulfil His promises to us even if it takes time to do so.
You may have become despondent because it seems that God has forgotten His promise to you, but let’s encourage ourselves that He does not forget His promises, and never leaves nor forsakes us.

Do you know who else mentioned angels ascending and descending?