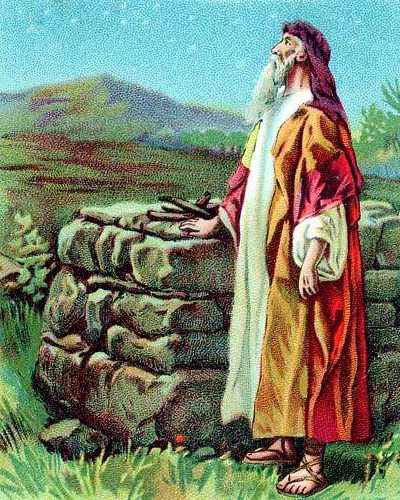 Abram and Lot stood on that mountain east of Bethel (Luz) surrounded by hundreds of tents – the whole community hat had travelled from Haran, stayed in Shechem, moved to Egypt and now come back to Bethel.

And there Abram, keen to avoid conflict offered Lot to take his pick of the land and Lot chose the lush Jordan valley to go and live.

Abram took a deep breath as he looked around at the rocky, sparse mountain. He was probably sad that his nephew and their families would now be moving away. It is always difficult when a family member chooses to leave or is forced to leave.
And Lot had picked the nicer looking area.

So no doubt there was a big family meeting to reveal the news. Abram as head of the family stood and told everyone the news. Then Lot told of the valley to the east where they would travel.

The men patted each other on the back and joked but knew they would miss their brothers.

The women were crying and laughing and crying.

The children listened intently and asked lots of questions.

Then came the preparation to leave, the packing of the tents, the identification of the individual sheep and cattle, the giving of gifts, a final feast and the pulling up of the tent pegs, the loading of the donkeys and then the goodbyes as Lot and around 1000-2000 people started the descent toward their future, down into the Jordan valley and would spread out even as far as Sodom.

Genesis 13:12 Abram dwelt in the land of Canaan, and Lot dwelt in the cities of the plain and pitched his tent even as far as Sodom

Then it was all quiet again. Half the community had gone.
Abram lingered on the hill till evening -a mixture of relief and sadness. A big sigh.

The next morning he stood there again. He could see off in the distance where Lot had managed to pitch the camps don on the plains near the Jordan River.

And then the Lord spoke to him.

And so at this important place of Bethel (Luz) a reconfirmation of the covenant came to Abram regarding the future of his descendants.

We will speak in more detail on this later.

What do you think?
God has a purpose in the things and events that come to your life.

Something doesn’t seem quite right.

A sadness comes upon you regarding a recent event or circumstance.

But then God speaks. “Lift your eyes now and look from the place where you are….”
It’s time to move forward.

It’s time to move forward into the next stage of His plan for your life.