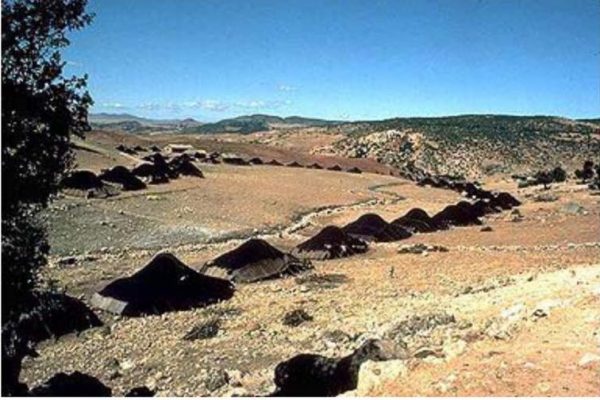 Why wouldn’t Abram just move into Bethel city? It was fortified and safe.

Why did he need to locate a whole mountain east of Bethel to ‘pitch his tents’?

Roughly how many people do you think were there in this community?

Well we find out that just 9 years later he was able to muster a fighting force of 318 men – trained servants who had been born in his own house.

Genesis 14:14 Now when Abram heard that his brother was taken captive, he armed his three hundred and eighteen trained servants who were born in his own house…

If those trained servants had wives and children, along with their own parents, aunts and uncles, there may have been over a thousand people just in Abram’s family.

Perhaps there were as many again in Lot’s family.

Possibly up to 2000-3000 people in tents, with enough sheep and cattle to supply food and milk for everyone.

No wonder they didn’t just enter the fortified city of Bethel.

That certainly would have been an incredible sight for the people of Bethel as Abram and his family and flocks and herds came wandering up the road from Shechem.

So instead of entering the city of Bethel, they turned aside to the mountain east of Bethel, between Bethel on the west and Ai on the east and pitched their tents.
With an average of 5 people per tent, that is around 400-600 tents.

It is little wonder that just 9 years later, the land could not support them all.

Genesis 13:5 Lot also, who went with Abram, had flocks and herds and tents.
6 Now the land was not able to support them, that they might dwell together, for their possessions were so great that they could not dwell together.

Thousands of people in hundreds of tents coming up the road from Shechem. Do you think the people of the fortified city of Bethel were just continuing with their daily business without noticing such a large group of people with all their flocks?

After all, there is only so much grass to feed flocks and water to drink.

Although the scripture doesn’t say so, I am sure that long before Abram arrived from Shechem to Bethel, the people of Bethel knew of Abram and his large community, they knew when he was on the move up from Shechem.

And knowing human nature, the ‘mayor’ of Bethel had been in talks with Abram prior to their arrival and had directed him to camp on a hill east of Bethel where there was enough room for their tent city, enough grazing for their sheep and enough water to drink so as not to drain their own supply.

So hundreds of tents covered the mountain-side east of Bethel and I’m guessing that the city of Bethel (and the neighbouring city of Ai), were in constant communication with Abram regarding the resource situation.

So hundreds of tents covered the mountain-side east of Bethel.
What a community. What a sight. What a responsibility.

Have you ever thought of Abram leading such a large family group or did you think of him as just a man, his wife, Sara, and his nephew Lot, with a few sheep?

Are you responsible for a family of people?
A wife? A husband?
Parents, children, uncles, aunties, nephews, nieces, cousins, in-laws?

God has placed you in this big extended family to be a responsible person.
Responsible for your own role in that family.
Responsible to bring encouragement, leadership, provision, education, protection.

Why not pause and pray and give thanks for His provision of your family.

Thank him for each member – even the ones that cause you grief.
How can you bless them today?