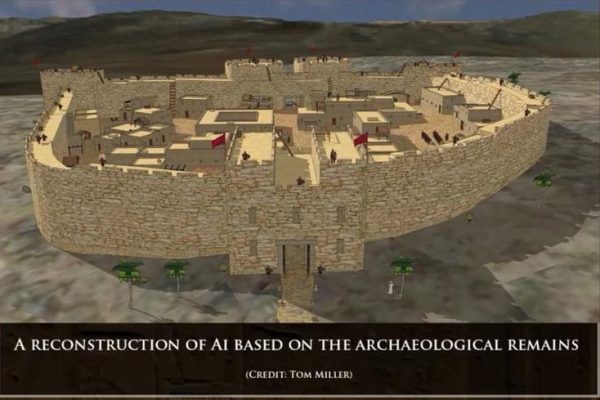 We have tentatively located Bethel and Abram’s Ai, but to be more precise in our search for Bethel, we will have to go forward in time to the time of Joshua where the Bible gives even more specific details.

Joshua 7:2 Now Joshua sent men from Jericho to Ai, which is BESIDE Beth Aven, on the EAST SIDE of Bethel, and spoke to them, saying, “Go up and spy out the country.” So the men went up and spied out Ai.
3 And they returned to Joshua and said to him, “Do not let all the people go up, but let about two or three thousand men go up and attack Ai. Do not weary all the people there, for THE PEOPLE OF AI ARE FEW.”
4 So about three thousand men went up there from the people, but they fled before the men of Ai.
5 And the men of Ai struck down about thirty-six men, for they chased them from BEFORE THE GATE AS FAR AS SHEBARIM, and struck them down ON THE DESCENT; therefore the hearts of the people melted and became like water.

So the initial information on the city of Ai in Joshua’s day was that it was
1. A SMALL CITY with a SMALL POPULATION.
2. Was situated BESIDE A PLACE CALLED BETH AVEN.
3. Was on the EAST SIDE OF BETHEL.
4. There was a GATE so the city of Ai was a FORTIFIED CITY WITH WALLS.
5. There was a place or thing called a SHEBARIM nearby. (Shebarim beans “breakers” and has been interpreted as perhaps a quarry where rocks are broken)
6. There was a DESCENT near the city. Presumably back down toward the Jordan Valley from where the Israelite army had come from.

But that is not all the information we have on Ai. Do you like mysteries? See if you can find out the other criteria for this little city from the following scriptures.

Joshua 8:3 So Joshua arose, and all the people of war, to go up against Ai; and Joshua chose thirty thousand mighty men of valour and sent them away by night.
4 And he commanded them, saying: “Behold, you shall lie in ambush against the city, BEHIND THE CITY. DO NOT GO VERY FAR FROM THE CITY, but all of you be ready.

9 Joshua therefore sent them out; and they went to lie in ambush, and STAYED BETWEEN BETHEL AND AI, ON THE WEST SIDE OF AI; but Joshua lodged that night among the people.
10 Then Joshua rose up early in the morning and mustered the people, and went up, he and the elders of Israel, before the people to Ai.
11 And all the people of war who were with him went up and drew near; and they came BEFORE THE CITY AND CAMPED ON THE NORTH SIDE OF AI. Now A VALLEY LAY BETWEEN THEM AND AI.
12 So he took about five thousand men and set them in ambush BETWEEN BETHEL AND AI, ON THE WEST SIDE OF THE CITY.
13 And when they had set the people, ALL THE ARMY THAT WAS ON THE NORTH OF THE CITY, and its REAR GUARD ON THE WEST OF THE CITY, Joshua went that night into the midst of the valley.
14 Now it happened, when the king of Ai saw it, that the men of the city hurried and rose early and went out against Israel to battle, he and all his people, at an appointed place BEFORE THE PLAIN. But he did not know that there was an ambush against him BEHIND THE CITY.
15 And Joshua and all Israel made as if they were beaten before them, and fled BY THE WAY OF THE WILDERNESS.
16 So all the people who were in Ai were called together to pursue them. And they pursued Joshua and were drawn away from the city.
17 There was not a man left in Ai or Bethel who did not go out after Israel. So they left the city open and pursued Israel.
18 Then the Lord said to Joshua, “Stretch out the spear that is in your hand toward Ai, for I will give it into your hand.” And Joshua stretched out the spear that was in his hand toward the city.
19 So those in ambush arose quickly out of their place; they ran as soon as he had stretched out his hand, and they entered the city and took it, and hurried to set the city on fire.
20 And when the men of Ai looked behind them, they saw, and behold, the smoke of the city ascended to heaven. So they had no power to flee this way or that way, and the people who had FLED TO THE WILDERNESS turned back on the pursuers.
21 Now when Joshua and all Israel saw that the ambush had taken the city and that the smoke of the city ascended, they turned back and struck down the men of Ai.
22 Then the others came out of the city against them; so they were caught IN THE MIDST OF ISRAEL, some on this side and some on that side. And they struck them down, so that they let none of them remain or escape.
23 But the king of Ai they took alive, and brought him to Joshua.
24 And it came to pass when Israel had made an end of slaying ALL THE INHABITANTS OF AI in the field, in the wilderness where they pursued them, and when they all had fallen by the edge of the sword until they were consumed, that all the Israelites returned to Ai and struck it with the edge of the sword.
25 So it was that ALL WHO FELL THAT DAY, BOTH MEN AND WOMEN, WERE TWELVE THOUSAND – ALL THE PEOPLE OF AI.
26 For Joshua did not draw back his hand, with which he stretched out the spear, until he had utterly DESTROYED ALL THE INHABITANTS OF AI.
27 Only the livestock and the spoil of that city Israel took as booty for themselves, according to the word of the Lord which He had commanded Joshua.
28 So Joshua BURNED AI and made it a heap forever, a desolation to this day.
29 And the king of Ai he hanged on a tree until evening. And as soon as the sun was down, Joshua commanded that they should take his corpse down from the tree, cast it at the ENTRANCE OF THE GATE OF THE CITY, and raise over it a great heap of stones that remains to this day.

Let’s start adding more facts about Ai.
7. There is a valley BETWEEN BETHEL AND AI, big enough for Joshua to hide 5000 men for an ambush, but not visible to either Ai or Bethel. (The people of Bethel were allies of the people of Ai). This valley is WEST of The city of Ai, BEHIND the city and NOT VERY FAR from the city.
8. There must be space on a hill on the NORTHERN side of Ai for the rest of the 30,000 men to camp.
9. There must be a VALLEY between this hill and the city of Ai – but the valley must be SHALLOW because the men were visible to the king of Ai.
10. The city FACED NORTH because Joshua camped on the north side of the city before (in front) of the city. The front of the city is the entrance gate.
11.There is a PLAIN near the city because they engaged in battle on a plain near the city.
12. The Israelite army pretended to flee TO THE WILDERNESS. This is back down the mountain towards the Jordan valley, Jericho, Gilgal and the River Jordan.
13. Men AND WOMEN died that day indicating that Ai had women in the city.
14. The city was BURNED and made a heap.

Looking for the city of Joshua’s Ai has been such a challenge for archeologists because there are so many criteria given in scripture.

The great news is that after thousands of years and much searching, a city that fulfils all of those criteria was found in 1995 by Dr Bryant Woods at a place called Khirbet el Maqatir.*

I won’t go into them here but if you are interested visit the website for *Associates for Biblical Archeology. #AssociatesForBiblicalResearch
http://www.biblearchaeology.org

For a more comprehensive article on Joshua’s Ai.
https://answersingenesis.org/…/getting-archaeology-right-a…/

For a video reconstruction of Ai.
https://youtu.be/C2c9FKlkQCo

One after another, credible archeologists have said the Bible wasn’t true because they couldn’t find this site of Ai the way the Bible describes -and people believed them. And then they find it EXACTLY as the Bibles says. Yet again the Bible proved to be completely historically accurate.

How do you feel about that?

Next in our search for the Biblical Bethel where Abram pitched his tent east of, we’ll look for the other key city in this triad of cities – Beth Aven.