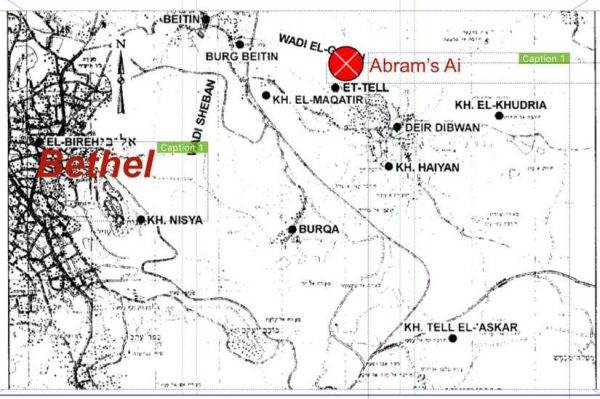 We are spending some time talking about BETHEL because of its importance in the scriptures both historically and in the future.

So firstly let’s try and find BETHEL on a map starting with the very specific details that the Lord has given in the scripture to describe this city and the surrounding towns and cities.

The first city we are going to look at is the city of Ai pronounced in Hebrew “EYE” not “AY EYE”.

From the scripture Genesis 12:8, when Abram arrived in the region after trekking from Shechem, we find that there must be A MOUNTAIN BETWEEN BETHEL AND AI.

Firstly Joshua’s Ai is a small fortified city.
Secondly it has to have been in existence when Joshua and the children of Israel entered the land around 1400BC.
Archeologists believe that the small fortified city (about 3 acres) of Ai of Joshua’s time is in the current position of ‘Khirbet el Maqatir’.* The pottery found there and other landmarks show that this is the most likely site for Joshua’s Ai. We will look at this a bit later.

On the other hand, the city of Ai in Abram’s time was a landmark city (so presumably a large city) and has a hill (or hills) between it and Bethel.
The larger city of Ai of Abram’s time is most likely the current site of ‘ET-TELL’ (about 27 acres).*
The pottery indicates that this city was a thriving city at the time of Abram, but did not exist at the time of Joshua (more than 400 years later).

BETHEL is what is referred to as a LIVING CITY.
A living city is a city that has never really been uninhabited throughout the ages because of its great location, water source, trade routes etc.
This is different to non living cities which rise and fall and become ‘ghost towns.
Jerusalem is an example of a living city.
Ai is an example of a non-living city.

So Abram and his family, and herds and servants established their little tent village on one of the hills (presumably the closest one) between BETHEL (El-Bireh) and AI (et-Tel) – with Bethel on the west and Ai on the east – two significant and large Canaanite cities high up on the mountains with views back down towards Shechem to the north, views to the west to the Mediterranean sea to the west, views to the east across the Jordan valley towards the desert and views to the south to current day Jerusalem.

Thank you Lord for such a specific description to give us so that we can know where Abram set up his altar.
Do you think that God, who is so precise in telling us where one of the landmarks of the land to be inherited by the descendants of Abram, is just as precisely interested in your life, your marriage, your children, your salvation, your understanding?

Why not take a moment and pray and thank the Lord that He cares for you.
Even if everything seems like a mess at the moment, why not pause and give him thanks.
And spend a moment to pray for brothers and sisters in persecuted places. Our hearts particularly go out to Christians in Nigeria today for strength under great trial.

*see the comprehensive archeological research of Associates for Biblical Archeology.