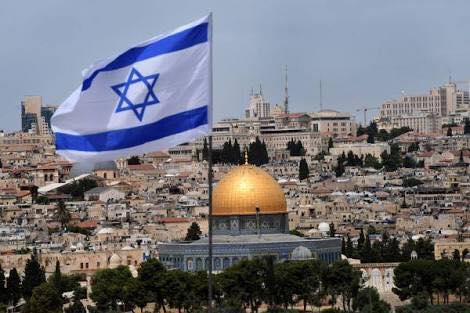 A brief history
Abram is covenanted the land by God.
The promise is iterated by God to Isaac and Jacob.

Jacob and his small family head to Egypt during a famine and live in Goshen.
The nation expands and is placed into slavery in Egypt.
God raises Moses to lead them out of Egypt and slavery.

The Law (the first law of the nation of Israel) is given to Moses on Mt Sinai after the sound of the long blast of Jubilee trumpet in the 4th month of the first year after leaving Egypt. Present at the initial meeting with God were Moses, Aaron, Nadab, Abihu and 70 elders (the government of Israel)
(Is this a jubilee year?)

The Tabernacle is erected and the appointments of the Lord instituted and the children of Israel wander through the wilderness en route to the promised land.

Moses dies and Joshua leads them back into the land of Canaan on Aviv 10 and they take their possession after the long blast pf the jubilee trumpets in the ‘battle’ of Jericho.

The nation is then led by judges and Kings.

King David establishes the City of David – Jerusalem and it becomes for the first time, the capital of the nation of Israel.

The Assyrian Empire takes the northern Kingdom into exile.

The Babylonian Empire razes the Temple, sacks Jerusalem and takes the Kingdom of Judah into captivity.

After 70 years of Babylonian captivity the Jewish captives are released to return to the land to take up possession.
Under King Cyrus and consequent decrees, the second Temple is built under Zerubbabel and Jerusalem rebuilt and fortified under Nehemiah.

Then the people endure the Greek and Roman occupation of the land.
Herod builds upon the temple initially built by Zerubbabel.
Jesus is born, lives and is crucified and is resurrected.

Eventually the city of Jerusalem is sacked and the Temple razed in 70 AD.

The land exists under Roman, Byzantine, and Turkish Empires.

In the 1800s Jewish people began to filter back into the land.

In 1897 Theodore Hertzl begins the Zionist Congress with an aim of reestablishing the Jewish homeland.

In 1917 Arthur Balfour’s famous declaration is accepted by the British government to reestablish the Jewish homeland.
In 1917 Jerusalem is liberated from the Turkish (Ottoman) Empire by the British.
(Is 1917-18 a Jubilee year?)

In 1920, a meeting of the League of nations takes place in San Remo, Italy and under international law, the nations of Syria, Iraq, Israel are defined and agreed upon.
Palestine would come under the sacred trust of Great Britain with a Mandate to reestablish a self governing state of Israel.
Britain divides the land at the Jordan River and the Kingdom of Jordan is born on the east (66% of the land area) and the state of Israel to the west (33% of the land area).
Palestinian Arabs are invited to move to the newly created Kingdom of Jordan east of the Jordan River.
Palestinian Jews are invited to move to the newly created State of Israel west of the Jordan.
The terms of this agreement are significantly hindered and changed by Great Britain.

The rise of Hitler and 1939-1945 sees World War 2 and the rise of Jewish persecution. They are not permitted to flee to Israel and ultimately the world witnessed the murder of 6 million Jewish people.

In 1947 resolution 181 partition plan was accepted by the UN to commence the new state of Israel.

In 1948, the modern state of Israel was realised.
The next day, the new state was invaded by 5 Arab nations with the intent to destroy Israel. They failed, but occupied lands that had been legally given to Israel.
This occupied land is called nowadays ‘West Bank’ and included control of the temple mount in Jerusalem. (Even though they had been given 66% of Palestine (Jordan), the Arabs now had also occupied the ‘West Bank’ portion of the 33% as well with the intent of removing the Jewish people from the remainder).

In 1967, the Arab nations again attempted to destroy Israel, which turned out to be what is now referred to as the 6 day war, when the small Israel airforce and army took back the land that had been illegally occupied by the Arabs in 1948 including Jerusalem. To this day, the world calls this rightfully reclaimed land – ‘occupied’ territory, ignoring the full international legal rights that Israel was given to the land.
(Is 1967-68 a jubilee year?)

In 1973 once again the Arabs tried to destroy the nation of Israel but failed in the ‘Yom Kippur’ war.

And to this day, the whole world has tried to bring peace to the region by GIVING AWAY THE LAND that God had already promised to the descendants of Abram.
In doing so, they have pitted themselves – not against man but against God Himself.

The general intent of Arab nations to remove Israel from the face of the earth has not changed. And there is a continual physical threat from them to destroy the nation of Israel.
There are attacks, bombs, missiles, and the development of nuclear weapons with the intent of removing Israel from the land.
There are complaints by the international community for Israel using force to defend this land.

And yet, this is not the time for Israel to leave this land promised to them by God. Actually the reverse is true. This is the fulfilment of the ancient covenant between God and Abram.

In most recent times:

In 2017 USA confirmed Jerusalem as the eternal capital of Israel.
In 2018 USA moved their embassy from Tel Aviv to Jerusalem along with some other nations.
In 2018 in the 4th month, the Basic Law for the nation of Israel was passed by the government of Israel. (Remember the first Law given in the 4th month of their first year as a nation at Mt Sinai)
(Is 2017-18 a jubilee year?)

You can see a copy of the wording of the Mandate for Palestine (1922) on https://goodnewsforisrael.com/the-mandate-for-palestine/