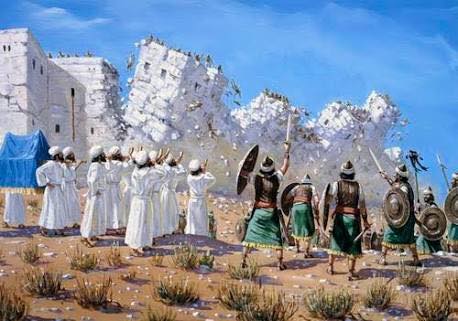 #37 God’s Jubilee In The City of Jericho

We are speaking about the ‘battle’ of Jericho. It is day 7.
For 6 days the same routine has been in operation.

Then walk around the city once with the trumpets being blown by the priests (around 30 minutes to an hour), and then head back to camp at Gilgal.

Today however, the 7th day, it was a bit different.

So everyone was up at dawn, (breakfast), put on their armour or priests clothing, got their weapons or trumpets, carefully retrieved the ark, assembled with Joshua and walked through the barley fields towards Jericho.

The people of Jericho looked out and saw them coming again.
On the first day they had been confused by what took place. There had been much talk within the city as to what this strange battle plan of the Israelites had meant.

The procession around the city for about 30 minutes to an hour; the blowing of trumpets; and then the retreat back to their camp and then the silence.
There no doubt had been many sacrifices and prayers said to their gods.

So today on the 7th day, the people of Jericho saw them coming as usual and assembling to do the same thing as before, supposing that today would be the same as the previous 6 days.

But when the procession reached the starting point after the first trip around, instead of pealing off and heading back to camp, they began to go around the city a second time.

There was stirring on the wall. The King of Jericho was notified that there had been a shift, a change. They watched as the procession took its second lap. As it came to the starting place again, instead of pealing off it continued.

Fear began to rise in the hearts of the Canaanites of Jericho. They had heard of the strange way the children of Israel had defeated Pharaoh in the Red Sea. The way a fire and cloud had led them through the desert. How they had been fed miraculously by Manna. How water had come from a rock. How enemies had been defeated. How they had crossed the Jordan River in full flood.

They came around the city for the sixth time and back to the starting place. The eyes of every person in Jericho was on this strange spectacle.

Only one woman and her family were huddled in her house on the northern wall.
Rahab had heard that the procession had not been normal today and she had heard the trumpets continue for several hours instead of tapering off after just one hour.
Was this going to be the day?
She wondered if those two spies would keep their promise. She had placed the scarlet thread out of her window as instructed – had they noticed it?

And then the seventh time around the city commenced. There was a great amount of anticipation from the priests and the men of war and of course Joshua himself.
The words of the Commander of the Lord’s armies stuck in his head.
The city will be destroyed. It is a gift from God. No one is permitted to live except Rahab and those in her house. And you are not permitted to touch the stuff! It is cursed. Take the silver and gold and bronze but they must come into the Lord’s treasury.

They were all prepped. As soon as they came back for the 7th time, there was to be a LONG JUBILEE BLAST of the trumpets SIGNIFYING THE RETURN OF THE LAND TO THE RIGHTFUL OWNERS and they all had to shout (TERUAH GEDOWLAH), like a trumpet sound – a long battle cry of jubilation and victory.

That is what Jericho is all about! The possession deed to the Promised land.

16 And the seventh time it happened, when the priests blew the trumpets (SHOFAROT), that Joshua said to the people: “Shout (RUA), for the Lord has given you the city!
17 Now the city shall be doomed by the Lord to destruction, it and all who are in it. Only Rahab the harlot shall live, she and all who are with her in the house, because she hid the messengers that we sent.
18 And you, by all means abstain from the accursed things, lest you become accursed when you take of the accursed things, and make the camp of Israel a curse, and trouble it.
19 But all the silver and gold, and vessels of bronze and iron, are consecrated to the Lord; they shall come into the treasury of the Lord.”
20 So the people shouted when the priests blew the trumpets (SHOFAROT). And it happened when the people heard the sound of the trumpet (SHOFAR), and the people shouted with a great shout (TERUAH GEDOWLAH), that THE WALL FELL DOWN FLAT.
Then the people went up into the city, every man straight before him, and they took the city.

What happened in the spirit realm when the Commander of the armies of Israel obeyed the Lord and fulfilled the strategy to the letter? It activated the Commander of the Lord’s armies – Jesus and the hosts of heaven (angels) to invade the physical realm and deliver the city into the hands of the rightful owners of the land and so fulfil the promise.

21 And they utterly destroyed all that was in the city, both man and woman, young and old, ox and sheep and donkey, with the edge of the sword.
22 But Joshua had said to the two men who had spied out the country, “Go into the harlot’s house, and from there bring out the woman and all that she has, as you swore to her.”
23 And the young men who had been spies went in and brought out Rahab, her father, her mother, her brothers, and all that she had. So they brought out all her relatives and left them outside the camp of Israel.
24 But they burned the city and all that was in it with fire. Only the silver and gold, and the vessels of bronze and iron, they put into the treasury of the house of the Lord.
25 And Joshua spared Rahab the harlot, her father’s household, and all that she had. So she dwells in Israel to this day, because she hid the messengers whom Joshua sent to spy out Jericho.
26 Then Joshua charged them at that time, saying, “Cursed be the man before the Lord who rises up and builds this city Jericho; he shall lay its foundation with his firstborn, and with his youngest he shall set up its gates.”
27 So the Lord was with Joshua, and his fame spread throughout all the country.

Rahab, the Gentile, was saved by the promise of the spies, had faith and showed it by hanging the scarlet thread, a promise honoured by the leader Joshua, she was grafted into the nation of Israel, became a part of the story and inheritor of the promises of the covenant of Abraham and his descendants.

You and me, Gentiles, saved by the promise of the Holy Spirit, have faith in God as shown by our trust in the scarlet blood of Messiah Jesus, a promise honoured by the King Jesus, grafted into the covenant made with Abraham, become a part of the story and inheritor of the promises of the New Covenant made by God with Israel.

Why not reflect on this and thank the Lord for your salvation right now. It truly is an act of His love, mercy and grace just as with Rahab.