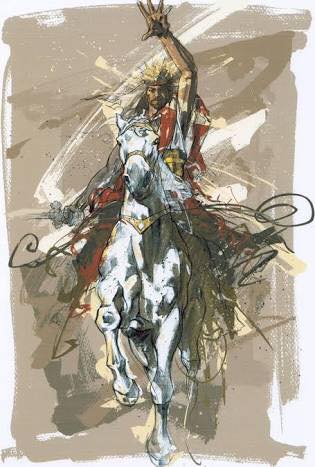 We are looking at the person – the Commander of the Lord’s army, who appeared to Joshua before the great battle of Jericho.

What we have determined so far:
He is not a man or an angel or Joshua would not have been permitted to bow down before Him.
He is similar to Melchizedek – the King of righteousness, the king of Salem (peace) who Abram delivered a tenth of the spoils of battle; a ‘man’ who had no genealogy, no mother, no father.

He is similar to the Angel of the Lord who wrestled with Jacob until morning and who Jacob called God.

He is similar to the Angel of the Lord who appeared to Moses in the burning bush, who identified Himself to Moses as the God of his fathers and called Himself “I AM”.

Who else in the scripture resembles this description?

For example, does anyone else in scripture refer to themselves as I AM?

John 8:57 Then the Jews said to Him, “You are not yet fifty years old, and have You seen Abraham?”
58 Jesus said to them, “Most assuredly, I say to you, before Abraham was, I AM.”

So Jesus declares that He is I AM.
At that statement the Jews tried to stone Him to death because He was calling Himself God.

But there is even more intrigue around the Commander of the Lord’s army – he held a drawn sword.

Does that happen anywhere else in the scripture?

Exodus 14:19 And the ANGEL OF THE LORD, who went before the camp of Israel, moved and went behind them; and the pillar of cloud went from before them and stood behind them.

So an Angel of the Lord led the children of Israel through the wilderness for 40 years. And we see Him when they were just about to cross over the Jordan River into the land of Canaan. The King of Moab, Balak, who was gripped with the terror of the Israelite army, employed a ‘prophet’ named Balaam to bring a curse upon the children of Israel.
But as Balaam proceeded to do so, the Lord stood in his way.

31 Then the Lord opened Balaam’s eyes, and he saw the ANGEL OF THE LORD Angel standing in the way WITH HIS SWORD DRAWN IN HIS HAND; and he bowed his head and fell flat on his face.

So is it still possible that this Angel of the Lord, with drawn sword is still a pre-appearance of Jesus?

Revelation 1:12 Then I turned to see the voice that spoke with me. And having turned I saw seven golden lampstands,
13 and in the midst of the seven lampstands One like the Son of Man, clothed with a garment down to the feet and girded about the chest with a golden band.
14 His head and hair were white like wool, as white as snow, and His eyes like a flame of fire;
15 His feet were like fine brass, as if refined in a furnace, and His voice as the sound of many waters;
16 He had in His right hand seven stars, OUT OF HIS MOUTH WENT A SHARP TWO-EDGED SWORD, and His countenance was like the sun shining in its strength.
17 And when I saw Him, I fell at His feet as dead. But He laid His right hand on me, saying to me, “Do not be afraid; I am the First and the Last.
18 I am He who lives, and was dead, and behold, I am alive forevermore. Amen. And I have the keys of Hades and of Death.

Revelation 19:11 Now I saw heaven opened, and behold, a white horse. And He who sat on him was called Faithful and True, and in righteousness He judges and makes war.
12 His eyes were like a flame of fire, and on His head were many crowns. He had a name written that no one knew except Himself.
13 He was clothed with a robe dipped in blood, and His name is called THE WORD OF GOD.
14 And the armies in heaven, clothed in fine linen, white and clean, followed Him on white horses. 15 NOW OUT OF HIS MOUTH GOES A SHARP SWORD, that with it He should strike the nations. And He Himself will rule them with a rod of iron. He Himself treads the winepress of the fierceness and wrath of Almighty God.
16 And He has on His robe and on His thigh a name written: KING OF KINGS AND LORD OF LORDS.

Matthew 26:53 Or do you think that I cannot now pray to My Father, and He will provide Me with more than twelve legions of angels?

What do you think of the following statement?