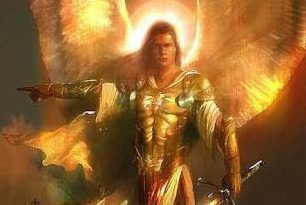 #32 The Commander of the Lord’s Army

With Jericho, the City of Palm trees standing right before them, just before their very first conquest in the land, Joshua goes for a walk, presumably while all the men are recovering from circumcision and he had walked over from Gilgal to ‘by Jericho’ (just a few kilometres).

Joshua had been here in the land before, back when he was 40 years old. That was 40 years ago – when Moses had sent him (and 11 others) to spy out the land. He was probably in prayer and checking out the terrain between Gilgal and Jericho, when he came upon a strange encounter.

Joshua 5:13 And it came to pass, when Joshua was by Jericho, that he lifted his eyes and looked, and behold, a Man stood opposite him with His sword drawn in His hand. And Joshua went to Him and said to Him, “Are You for us or for our adversaries?”
14 So He said, “No, but as Commander of the army of the Lord I have now come.”
And Joshua fell on his face to the earth and worshiped, and said to Him, “What does my Lord say to His servant?”
15 Then the Commander of the Lord’s army said to Joshua, “Take your sandal off your foot, for the place where you stand is holy.” And Joshua did so.

Who was this Commander of the Lord’s armies? A man? An angel? God?

Well He had a sword. Was He therefore Michael the arch angel? (Daniel 10:13).
Perhaps – but Joshua called him ‘my Lord’ (Adonai) and fell on his face to the earth and worshipped Him – and the Commander did not prevent him.

When the apostle John bowed before the angel, the angel prevented him.

Revelation 19:10 And I fell at his feet to worship him. But he said to me, “See that you do not do that! I am your fellow servant, and of your brethren who have the testimony of Jesus. Worship God!…..”

So he’s not a man or an angel.

To give us a clue, did anyone else in the Bible encountered such men as this?
Well there was the strange case of Abram when he met Melchizedek (who had no mother or father)
Genesis 14:18 Then Melchizedek king of Salem brought out bread and wine; he was the priest of God Most High.
19 And he blessed him and said:“Blessed be Abram of God Most High, Possessor of heaven and earth;
20 And blessed be God Most High, Who has delivered your enemies into your hand.” And he gave him a tithe of all.

Melchizedek BLESSED ABRAM. Abram gave Him a tithe of all. Does this sound like a mere man?

Hebrews 7:3 WITHOUT FATHER, WITHOUT MOTHER, WITHOUT GENEALOGY having NEITHER BEGINNING OF DAYS NOR END OF LIFE, but made like the SON OF GOD, remains a priest continually.

Then there was Jacob who wrestled with a strange Man all night long.

Genesis 32:24 Then Jacob was left alone; and a Man wrestled with him until the breaking of day. 25 Now when He saw that He did not prevail against him, He touched the socket of his hip; and the socket of Jacob’s hip was out of joint as He wrestled with him.
26 And He said, “Let Me go, for the day breaks.” But he said, “I will not let You go unless You bless me!”
27 So He said to him, “What is your name?” He said, “Jacob.”
28 And He said, “Your name shall no longer be called Jacob, but Israel; for YOU HAVE STRUGGLED WITH GOD AND WITH MEN, and have prevailed.”
29 Then Jacob asked, saying, “Tell me Your name, I pray.”
And He said, “Why is it that you ask about My name?” And He blessed him there.
30 So Jacob called the name of the place Peniel: “For I HAVE SEEN GOD FACE TO FACE, and my life is preserved.”

Jacob recognised afterwards that He had been WRESTLING WITH GOD.

So who is the Commander of the Lord’s armies God?
Well listen to what He said to Joshua next and YOU decide.

Joshua 5:15 And He said to Joshua, “TAKE YOUR SANDAL OFF YOUR FOOT, for THE PLACE WHERE YOU STAND IS HOLY.” And Joshua did so.

Ever heard that phrase before?

Remember Moses when he saw the burning bush, which burned but was not consumed? And the Angel of the Lord from within the bush began to speak to Moses?

Exodus 3:2 And the ANGEL OF THE LORD appeared to him in a flame of fire from the midst of a bush. So he looked, and behold, the bush was burning with fire, but the bush was not consumed.

5 Then He said, “Do not draw near this place. TAKE YOUR SANDALS OFF YOUR FEET, for THE PLACE WHERE YOU STAND IS HOLY GROUND.”
6 Moreover He said, “I AM THE GOD OF YOUR FATHER — the God of Abraham, the God of Isaac, and the God of Jacob.” And Moses hid his face, for he was afraid to LOOK UPON GOD.

Not only did the voice from the bush identify Himself as God, He then went on to give His name.

So it seems that the Commander of the Lord’s army is very similar or even the very same person who appeared to Moses – “I AM”.

What do you think? Same person?
Is the Commander of the Lord’s army who appeared to Joshua as he surveyed the land around the City of Palm Trees – Jericho, just prior to the first great battle to possess the Promised land – the Great I AM?