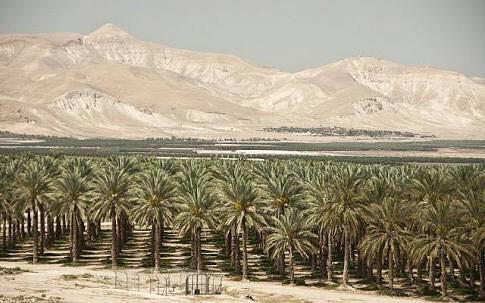 The Israelites crossed over the Jordan River, and for the first time since Jacob went down to Egypt, they were again on the Promised land.

Joshua 4:13 About forty thousand prepared for war crossed over before the Lord for battle, to the plains of Jericho.

The men were circumcised and the kept the first Passover and Feast of Unleavened Bread in their inherited land. And the Manna stopped and they ate the barley that grew in the land.

Joshua 5:10 Now the children of Israel camped in Gilgal, and kept the Passover on the fourteenth day of the month at twilight on the plains of Jericho.
11 And they ate of the produce of the land on the day after the Passover, unleavened bread and parched grain, on the very same day.
12 Then the manna ceased on the day after they had eaten the produce of the land; and the children of Israel no longer had manna, but they ate the food of the land of Canaan that year.

And then they turned their attention to their task at hand – to take the land. That’s right – TAKE THE LAND. They had to fight for it. Even though God had promised them the land, there were people living in the land – the Canaanites (and others) – who were simply not going to give up their homes.

Sound familiar? God has lavished us with promises – but they don’t just fall into our hands – we have to TAKE THEM. The devil is very comfortably settled into preventing our promises coming to pass.

The very first city that stood before them was the great city of Jericho with its magnificent walls.

It is a very special place because it is here that God chose to make a statement about His power and about land ownership – both to the Israelites AND the Canaanites (and everyone else in the land).

What do you think His statement was? Yes, that’s right. With a demonstration of His power and His will, the Lord would be saying in His actions – THE EARTH IS MINE AND ITS FULNESS.

And “I HAVE GIVEN IT TO THESE PEOPLE, THE DESCENDANTS OF ABRAM, SO IT’S TIME FOR EVERYONE ELSE TO MOVE OUT”.

This place of demonstration of God’s power and intent was affectionately called THE CITY OF PALM TREES – in Hebrew
???? ???????????. (Ir-hatmarim)

Deuteronomy 34:3 …. and the plain of the VALLEY OF JERICHO, THE CITY OF PALM TREES, as far as Zoar

Judges 1:16 Now the children of the Kenite, Moses’ father-in-law, went up from the CITY OF PALMS with the children of Judah into the Wilderness of Judah, which lies in the South near Arad; and they went and dwelt among the people.

Judges 3:13 Then he gathered to himself the people of Ammon and Amalek, went and defeated Israel, and took possession of the CITY OF PALMS.

2 Chronicles 28:15 ….. So they brought them to their brethren at JERICHO, THE CITY OF PALM TREES. Then they returned to Samaria.

And indeed if you have ever been to the Jordan valley, the one thing you cannot help seeing is palm trees. What type of palm trees? Date palms. Lots and lots of date palms.

So here the descendants of Abram stood, on the western side of the Jordan River – facing the land promised to Abram.

Up the high hill to the left would one day be, several hundred years from this day, the capital of Israel – Jerusalem.

And straight in front them, the sight they beheld was the great City of Palm Trees with its impenetrable walls – and it’s completely debaucherous culture, idol worship and child sacrifices.

It represented the exact opposite of the Kingdom of God. It represented Satan and the kingdom of darkness.
And it barred the way to the land that God had promised to Abram’s descendants – who now stood facing this obstacle.

This city was Jericho.
And God was going to make an example of it!

And here’s what the Lord was going to declare by His miraculous actions.

Job 41: 9 Indeed, any hope of overcoming him (Leviathan) is false; shall one not be overwhelmed at the sight of him?
10 No one is so fierce that he would dare stir him up. Who then is able to stand against Me?
11 Who has preceded Me, that I should pay him? EVERYTHING UNDER HEAVEN IS MINE.

Psalm 50:9 I will not take a bull from your house, nor goats out of your folds.
10 For EVERY BEAST OF THE FIELD IS MINE, and THE CATTLE ON A THOUSAND HILLS..
11 I know all the birds of the mountains, and the wild beasts of the field are Mine.
12 “If I were hungry, I would not tell you; for THE WORLD IS MINE, AND ALL ITS FULNESS.

Are you ready to see what unfolds as God deals with this city by the children of Israel? I think you may be surprised what lies beneath the English words but is as clear as day in the Hebrew.

Is there any promise that the Lord has said in His word to you, as a child of God, that has not yet come to pass?

Is there an obstacle that seems like the devil itself and impenetrable?

Are you ready to face it – not alone, but with the miraculous power of your God?