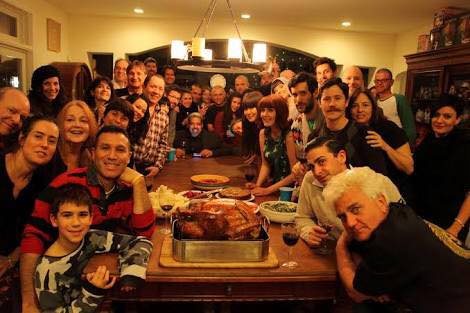 #28 A Home Where Strangers Are Welcome

Listen again to some of the words of the last speech Moses gave to the children of Israel before they passed in to the Promised Land.

But then he added the essential point-

16 Therefore circumcise the foreskin of your heart, and be stiff-necked no longer.
17 For the Lord your God is God of gods and Lord of lords, the great God, mighty and awesome, who shows no partiality nor takes a bribe.
18 He administers JUSTICE for the FATHERLESS and the WIDOW, and LOVES THE STRANGER, giving him food and clothing.
19 Therefore LOVE THE STRANGER, for you were strangers in the land of Egypt.

He reiterates the great concept of God owning the EARTH AND ALL THAT IS IN IT.
Along with that he says that the Lord has CHOSEN THIS GROUP OF PEOPLE (above all peoples) to inherit it.
So don’t be arrogant. Don’t be hard hearted. Look after other people. Give them a seat at your table. Share your food. Be kind and gentle with people. Just remember that you were STRANGERS – apart from your OWN LAND.

The apostle James (brother of Jesus) sums up this thought –

James 1:27 Pure and undefiled religion before God and the Father is this: to visit ORPHANS AND WIDOWS in their trouble, and to KEEP ONESELF UNSPOTTED from the world.

Can you see this theme?
God owns the earth and everything in it.
He is giving it to the children of Israel as an inheritance.
They will possess land which will look after them – a place to finally rest and call their own.
A place to build their home.
A place to put in their vines and vegetables.
A place to raise their children in safety.
A piece of land that will sustain them with food on their table and produce to sell.
A land that will sustain animals and provide meat and milk and skins to keep them warm.
A land to be and feel established.
A land to come home to.
A land to defend.
A land to pass on to your sons and daughters, and their children, and their children.

No more wandering. No more being servants and slaves. No more strangers.

And if you really messed up and had to sell it, and you again came into having to sell yourself as a servant or slave, the YOVEL – JUBILEE every 50th year, will ensure that you get your FREEDOM back and you will land back and return to it once again.

And the extra clause – But REMEMBER TO LOOK AFTER THOSE WHO ARE STRANGERS – because you know how bad and helpless you were when you yourself were strangers in Egypt.

There are many spiritual applications here but in a practical terms, do you have your own home?
A place for you and your family to come back to, to grow your own food, or to lease out to others?
A place where others can come and feel safe and sense the presence of the Lord?

If not, why not make this a prayer point to the Lord and then actively pursue owning your own land and home.