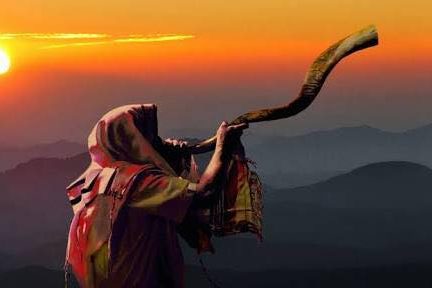 In the last post, we saw that the children of Israel had arrived and camped at the base of Mt Sinai. God called Moses to ascend Mt Sinai to be with Him where He then declared “THE EARTH IS MINE”.

And then He told Moses to prepare the people to meet with Him.

Exodus 19:12 You shall set bounds for the people all around, saying, ‘Take heed to yourselves that you do not go up to the mountain or touch its base. Whoever touches the mountain shall surely be put to death.
13 Not a hand shall touch him, but he shall surely be stoned or shot with an arrow; whether man or beast, he shall not live.’ When the TRUMPET SOUNDS LONG, they shall come near the mountain.”

And then, God came in thunderings and lightnings and thick cloud and there was a massive trumpet blast that brought great fear on the people.

16 Then it came to pass on the third day, in the morning, that there were thunderings and lightnings, and a thick cloud on the mountain; and the SOUND OF THE TRUMPET WAS VERY LOUD, so that all the people who were in the camp trembled.

Why am I emphasising the TRUMPET?

The word generally for trumpet in Hebrew throughout scripture is ??????? (SHOFAR). I’m sure you have heard of a shofar. And in Exodus 19:16 where it says ‘the SOUND OF THE TRUMPET’ – the word for trumpet is indeed – ‘Shofar’.

It’s a strange word to use for ‘trumpet’ don’t you think?

Do you know what YOVEL is? Let’s go straight to the meaning of YOVEL.

YOVEL means JUBILEE. A very special proclamation of freedom, family and inheritance!
A complete year of doing so.

Slaves set free to return to their FAMILY.
Return to your possession (LAND).

Important to God? You’d better believe it. The Kingdom of Judah went into captivity to Babylon for 70 years because they didn’t honour YOVEL (one year for every year they failed to keep it over 490 years).

2 Chronicles 36:21 (Israel was carried away to Babylon)…. to fulfil the word of the Lord by the mouth of Jeremiah, until the land had enjoyed her Sabbaths. As long as she lay desolate she kept Sabbath, to fulfil seventy years.

So what do you think was the bigger reason the Lord used the proclamation “THE EARTH IS MINE” in relation to a YOVEL (JUBILEE) trumpet?