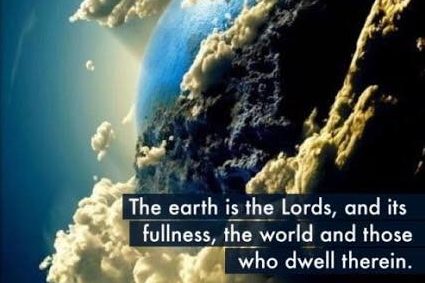 We have touched on this subject of the Lord giving the land to Abram’s descendants.
Does God have the right to do so?
What if somebody already owns the land?
Is it just for God to suddenly apportion the land to people who don’t already live there?
Is that fair?

I’m Australian by birth and one of our national sports is a game called Rugby League. As a child, my father took me to rugby games. I learned the game, knew all the players, had my favourite team, watched the sport on TV.

Watched the matches week-by-week, watched the finals red up for the Grand Finals.

To this day, even though I don’t watch the game as much these days, I still love the game and I know the rules (even though they have evolved a lot over the last 40 years).

When my wife began to watch the game, it was frustrating to hear her say things like, “Why did the referee penalise the other team for passing the ball forward, or for dropping the ball, or for stepping only slightly over the sideline. It doesn’t seem fair.”

I would explain to her that the referee was only enforcing the rules of the game. She would argue that in soccer (football) you can pass the ball forward, so why not in rugby?

In soccer you can’t handle the ball with your hands, but in rugby that is the main way the ball is moved around the field. Different game, different rules.”

The fact is – everybody who was playing, the referee, the commentators and the spectators all understood that they were here to play or watch rugby league and not soccer so everyone, reluctantly or not, accepted the rules of the game.

Who invented the game of rugby? Who made up the rules? I don’t know.

Why didn’t he say you could pass the ball forward or step over the sideline without penalty?
I don’t know – he just did and I guess we’ve all become accustomed to the rules and are generally happy with them.

Let’s look at the Earth like that game of rugby.

Who created the world for His own purposes? God did.

Who made the human being in His image? God did.

Who is the King of the Kingdom of God? God is.

Who made up the rules (with infinite love and wisdom by the way)? God did.

Ok so we can identify the originator of the whole thing – unsurprisingly it is God.

So why does everybody want to try and change the rules of the ‘game’ when they are so clearly spelled out in the Bible, which God has given to us tounderstand the Kingdom of God?

And when it comes to things like land distribution, here’s how it works.

THE LORD HAS AND ALWAYS WILL OWN THE WHOLE WORLD.

Let’s just look at one scripture for now.

Psalm 24:1 The earth is the Lord’s, and all its fullness, the world and those who dwell therein.
2 For He has founded it upon the seas, and established it upon the waters.

This verse clearly says that THE EARTH IS THE LORD’S.
Not only the earth but ALL IT’S FULLNESS.
And if you are not still clear -THE WORLD
And on top of that – ALL THOSE WHO DWELL WITHIN.

Do you dwell within the world? I hope so.
Then what does the rule book say? – you belong to the Lord.
Some may react to that and say “Well I don’t belong to anyone but me. And no God is going to own me.”

But that is not what the rule book says. It says that ALL WHO DWELL WITHIN THE WORLD belong to the Lord.

But back to the Earth – THE EARTH, AND ALL IT’S FULNESS -THE WHOLE WORLD belong to the Lord.

So who does the Earth belong to? God.

So if it belongs fully to God, do any of us really own any land?

And if the Lord owns everything, can He give it to anyone He wants?

And does can He have to justify who He gives it to?