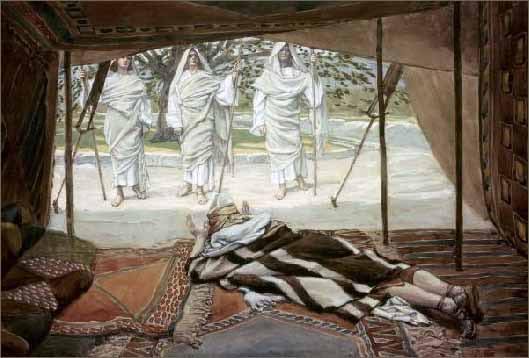 #22 The Lord Appeared To Abram

Genesis 12:7 Then the Lord APPEARED to Abram and said, “To your descendants I will give this land.” And there he built an altar to the Lord, who had appeared to him.

Up until now the only way the Lord has communicated with Abram is to have ‘spoken’ to him.

Vs 4 So Abram departed as the Lord had SPOKEN to him….

How did the Lord speak to Abram? Was it audibly, was it in a dream, in a vision or in his spirit – like an impression, was it while he was reading, or looking at the stars; did an angel appear to him?

I think it is fair to say that any of those are possible because each of those methods was employed by God in other places in the Scripture.

I think that He spoke to Abram the same way that He speaks to people today – by His Spirit and in any of the ways above.

I’m not sure about you, but I have had the privilege of ‘hearing’ the Lord speak to me via impressions in my mind, words of knowledge, understanding things that I didn’t know before, revelations while reading the Bible, dreams and visions.

I have never heard the audible voice of God or seen an angel, but I know of people who have.

In Acts 7:2 Stephen suggests that the Lord had APPEARED to Abram on a previous occasion – way back when Abram lived in Ur of the Chaldeas. Stephen said, “Hear me, brethren and fathers! The God of glory APPEARED to our father Abraham when he was in Mesopotamia, before he lived in Haran”.

So Abram stepped out on a WORD of the Lord; he obeyed and packed up and walked out of his country and down into the land of Canaan.

But once entering into the land and stopping at the ‘gateway’ of the new land in Shechem, there to meet him was the Lord.

Then the Lord APPEARED to Abram. (He was 75 years old).

This was not the only other time that the Lord would appear to Abram in his life.

Melchizedek – ate and drank with Abram.
Genesis 14:18 Then Melchizedek king of Salem brought out bread and wine; he was the priest of God Most High.

Hebrews 7:1 For this Melchizedek, king of Salem, priest of the Most High God, who met Abraham returning from the slaughter of the kings and blessed him,
2 to whom also Abraham gave a tenth part of all, first being translated “king of righteousness,” and then also king of Salem, meaning “king of peace,”
3 WITHOUT FATHER, WITHOUT MOTHER, WITHOUT GENEALOGY having NEITHER BEGINNING OF DAYS NOR END OF LIFE, but made like the SON OF GOD, remains a priest continually.
4 Now consider how GREAT THIS MAN WAS, to whom even the patriarch Abraham gave a tenth of the spoils.

On another occasion God appeared, talked and then went up from Abram.
Genesis 17:1 Now when Abram was ninety-nine years old, the LORD APPEARED to Abram.
3 Then Abram fell on his face, and God talked with him…
22 Then He finished talking with him, and God WENT UP from Abraham.

Then there was the time when God came to Abram as three men and ate with him.
Genesis 18:1 Then the Lord APPEARED to him by the terebinth trees of Mamre, as he was sitting in the tent door in the heat of the day.
2 So he lifted his eyes and looked, and behold, THREE MEN WERE STANDING BY HIM; and when he saw them, he ran from the tent door to meet them, and bowed himself to the ground.

We know that the Lord APPEARED to Isaac and Jacob and Moses and Joshua. He appeared to Gideon and Manoah and Samuel and the apostle Paul.

He sometimes appeared in His glory cloud; He appeared in dreams and visions.
He often appeared as the Angel of the Lord.

But when it says that He APPEARED to Abram, you get the distinct impression that He was right there with Abram in a physical form, even eating and drinking with him.

But fast forward a couple of thousand years and of course the world experienced the fulfilment of the covenant with Abram – yes the Lord God actually APPEARED in the flesh when Jesus was born and dwelt amongst us. “The Word became flesh and dwelt among us.”
He walked with, talked with, ate with and did life with people as a human being for 33 years.
He said “If you have seen me you have seen the Father.”

Oh I just love that the Lord continually wants to be involved in our lives – from Abram to the
advent of the Messiah Jesus.

The Lord APPEARED to Abram.