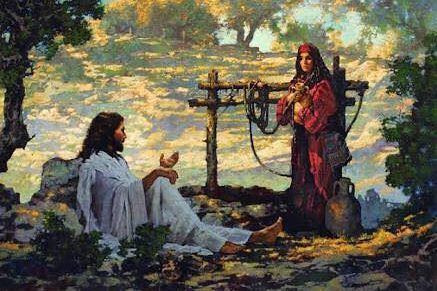 We are continuing to talk about the significance of this place Shechem – the first place that Abram came to in the land of Canaan. Let’s continue from the last post (go and read Post 18 to get the full picture).

I would like to focus on the New Testament to see if Shechem is mentioned there. If the covenant with Abram is significant to God, then there should be an interest for Jesus in this special place. Is Shechem mentioned when Jesus walked the earth?

In the days of the Messiah, Jesus, Shechem was called Sychar. Do you remember what happened at Sychar? That’s right – Jesus met a Samaritan woman at a well. And which well was that? Jacob’s well. That puts this scene right at Shechem.

John 4:5 So He came to a city of Samaria which is called Sychar, near the plot of ground that Jacob gave to his son Joseph.
6 Now Jacob’s well was there. Jesus therefore, being wearied from His journey, sat thus by the well. It was about the sixth hour.
7 A woman of Samaria came to draw water. Jesus said to her, “Give Me a drink.”

He told her of “living water” where she could thirst no more.

John 4:19 The woman said to Him, “Sir, I perceive that You are a prophet.
20 Our fathers worshiped on this mountain, and you Jews say that in Jerusalem is the place where one ought to worship.”

Which mountain was she referring to? Mt Gerazim right there towering above the town of Sychar (Shechem).

21 Jesus said to her, “Woman, believe Me, the hour is coming when you will neither on this mountain, nor in Jerusalem, worship the Father.
22 You worship what you do not know; we know what we worship, for salvation is of the Jews.
23 But the hour is coming, and now is, when the true worshipers will worship the Father in spirit and truth; for the Father is seeking such to worship Him.
24 God is Spirit, and those who worship Him must worship in spirit and truth.”
25 The woman said to Him, “I know that Messiah is coming” (who is called Messiah). “When He comes, He will tell us all things.”
26 Jesus said to her, “I who speak to you am He.”

Jesus confirmed to this Samaritan woman here at Shechem that He was the Messiah.

He revealed His knowledge that she had had several husbands, she took him as a prophet/ Messiah and went off to the village to call the people of the town.

39 And many of the Samaritans of that city believed in Him because of the word of the woman who testified, “He told me all that I ever did.”
40 So when the Samaritans had come to Him, they urged Him to stay with them; and He stayed there two days.
41 And many more believed because of His own word.
42 Then they said to the woman, “Now we believe, not because of what you said, for we ourselves have heard Him and we know that this is indeed the Messiah, the Saviour of the world.”

Which town was this? Sychar (Shechem). Where Abram first built an altar in the Promised Land.

This amazing little village became a significant part of the future Kingdom of Israel and a place where the decision to obey and follow the Lord or not – was made clear with its consequences.

And the powerful covenant that God made with Abram, became visible from the imagery of the blessings found in Deuteronomy 28:1-14. This is what blessing looks like.

Did you know that as “sons of Abraham” ( by faith in Jesus), you have been grafted into this covenant and have full rights to these blessings.
Are you realising the blessings spoken at Shechem (Mt Gerizim) in Deuteronomy 28:1-14 in your life?