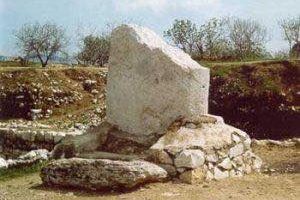 We are talking about the significance of this place Shechem – the first place that Abram came to in the land of Canaan. Let’s continue from the last post (go and read Post 15 to get the full picture).

Hundreds of years later, after their slavery in Egypt, the nation of Israel stood ready to cross over into the Promised land and Moses commanded that they go to Mt Gerizim and Mt Ebal (Shechem) and proclaim the promises and curses of God to the new nation in their new land (Deuteronomy 27:2-13).

So the nation of Israel led by Joshua came to Shechem.

Joshua 24:1 Then Joshua gathered all the tribes of Israel to Shechem and called for the elders of Israel, for their heads, for their judges, and for their officers; and they presented themselves before God.

Joshua 24:14 “Now therefore, fear the Lord, serve Him in sincerity and in truth, and put away the gods which your fathers served on the other side of the River and in Egypt. Serve the Lord!

15 And if it seems evil to you to serve the Lord, choose for yourselves this day whom you will serve, whether the gods which your fathers served that were on the other side of the River, or the gods of the Amorites, in whose land you dwell. But as for me and my house, we will serve the Lord.”

16 So the people answered and said: “Far be it from us that we should forsake the Lord to serve other gods;

17 for the Lord our God is He who brought us and our fathers up out of the land of Egypt, from the house of bondage, who did those great signs in our sight, and preserved us in all the way that we went and among all the people through whom we passed.

18 And the Lord drove out from before us all the people, including the Amorites who dwelt in the land. We also will serve the Lord, for He is our God.”

19 But Joshua said to the people, “You cannot serve the Lord, for He is a holy God. He is a jealous God; He will not forgive your transgressions nor your sins.

20 If you forsake the Lord and serve foreign gods, then He will turn and do you harm and consume you, after He has done you good.”
21 And the people said to Joshua, “No, but we will serve the Lord!”

22 So Joshua said to the people, “You are witnesses against yourselves that you have chosen the Lord for yourselves, to serve Him.”
And they said, “We are witnesses!”

23 “Now therefore,” he said, “put away the foreign gods which are among you, and incline your heart to the Lord God of Israel.”

And he built an altar on Mt Ebal.

Here the tabernacle was set up and then the blessings and cursings recorded in Deuteronomy 28 were written on whitewashed tablets and were spoken out by millions of Israelites at the same time – the blessings on Mt Gerizim and the curses on Mt Ebal.

The thunder of millions of voices saying the blessings and curses would have resounded across the town of Shechem – a remembrance of God’s promise to Abram here.

Joshua 24:25 So Joshua made a covenant with the people that day, and made for them a statute and an ordinance in Shechem.

26 Then Joshua wrote these words in the Book of the Law of God. And he took a large stone, and set it up there under the oak that was by the sanctuary of the Lord.

27 And Joshua said to all the people, “Behold, this stone shall be a witness to us, for it has heard all the words of the Lord which He spoke to us. It shall therefore be a witness to you, lest you deny your God.”

28 So Joshua let the people depart, each to his own inheritance.

Joshua followed Jacob’s lead and had the idols and foreign gods buried at Shechem – specifically the oak tree. He set up a statute and an ordinance.

Is God faithful to His covenant? What about His covenant to you – a son or daughter of Abraham (through your faith in the Messiah Jesus?)

Do you think if God can fulfil His promise to Abraham in such spectacular fashion as to bring Abram’s physical descendants back to worship on this site, that He can answer your prayers? What are you asking of Him today?