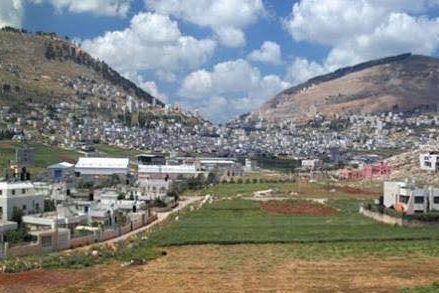 What do you know of Shechem? How important was it that the Lord brought Abram to this place first on his journey into the land of Canaan?

Shechem (which means saddle) is nestled in a valley between two mountains in Samaria (see the picture). It looks like a saddle. One mountain is called Mt Gerizim to the south. And one is called Mt Ebal to the north. Today it is a city called Nablus.

Let’s look at a few reasons why Shechem is important to the covenant between God and Abram.

First of all – it was the first place where Abram SAW God. (I personally think that he met with a theophany or pre-appearance of the Messiah Jesus as happens in other places throughout scripture).
Secondly – It was here that the Lord made a proclamation – “To your descendants I will give this land.”.
And Abram built an altar – his first of several altars in the land of Canaan.

And then we will see that it became a very significant place in the minds and hearts of the descendants of Abram and the leaders of the nation of Israel.

Let’s start with Jacob – Abram’s grandson, who was renamed “Israel” by God – and his unusual link with this special place called Shechem.

175 years after Abram arrived in Shechem, it would become the home of Jacob and his family after Jacob left his uncle Laban after 20 years of service. Jacob was more than 90 years old and was with his family -Leah, Rachel, their maid servants, his children, his household and great herds of sheep when he arrived in Shechem (knowing full well that this was the place where his grandfather had built an altar to God and received the proclamation).

Genesis 33:18-20 Then Jacob came safely to the city of Shechem, which is in the land of Canaan, when he came from Padan Aram; and he pitched his tent before the city. And he bought the parcel of land, where he had pitched his tent, from the children of Hamor, Shechem’s father, for one hundred pieces of money. Then he erected an altar there and called it El Elohe Israel.

Jacob (Israel) refers to God as the God of Israel here at Shechem.

It seems at first surprising to have Jacob come and dwell here, buy the land that Abram had built his altar on, and dig the famous well – known as Jacob’s Well. But it brought an alignment of Jacob (Israel) to the covenant that was specifically aimed at Abram’s physical descendants ie he (Israel) and his family.
So perhaps out of honour, and an attempt to stay true to that covenant Jacob and his family dwelt here in the very spot where God made the covenant with Abram.

And eventually while they were living there, the crown prince of Shechem took a liking to Jacob’s daughter Dinah and wanted to marry her. Jacob’s ever-scheming sons arranged to feign their agreement to this marriage if the male inhabitants of Shechem would consent to all be circumcised. They agreed en-masse and so all the men of Shechem were circumcised but when the resulting fever was greatest, Jacob’s sons rose up and killed all the men of Shechem (who were too sick to resist).

Jacob was then forced to flee to Bethel. But not before he necessarily dealt with his family’s idols.

Genesis 35:2-4 So Jacob said to his household and to all who were with him, “Put away the foreign gods that are among you, and purify yourselves, and change your garments; then let us arise and go up to Bethel, that I may make there an altar to the God who answered me in the day of my distress and has been with me wherever I have gone.”

So they gave to Jacob all the foreign gods that they had, and the rings that were in their ears; and Jacob hid them under the oak which was near Shechem.

Where are all those idols buried? Correct – in Shechem.

Quickly we are seeing Shechem being a place that is all about God’s covenant and our decision to follow him or not.

Have you had the opportunity to “bury your idols” since you believed on Jesus? What are they?
They are the things that you put before the Lord. Yes even the patriarch Jacob had them in his midst and in his family. But at Shechem they had to go.
Are you ready to let go of the idols that may prevent you inheriting the fulness of God’s covenant?